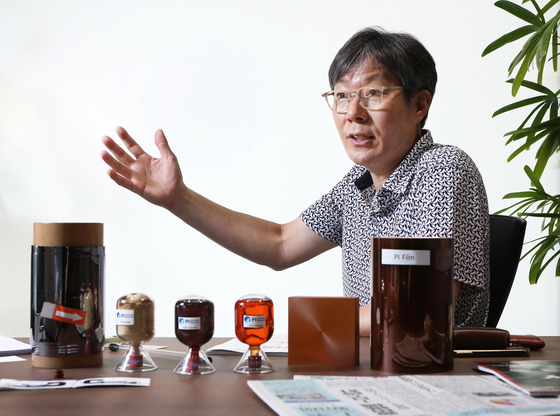 Kim Tae-lim, CEO of PI Advanced Materials, introduces a set of materials the company produces on July 20 at the company's office in central Seoul. [PARK SANG-MOON]


There is a little known material used in nearly all high technologies you may have heard of: chips, smartphones, organic light emitting diode (OLED) displays, 5G and EV batteries.

They are polyimides, high-performance plastics with high heat-resistance and durability. They are also exceedingly light.

Soaring demand for tech products and services has translated into high demand for the material.

This is all good news for of PI Advanced Materials, the world’s largest supplier of polyimide film. The Seoul-based producer became a dominant player by taking away the dominance once held by storied specialty chemical companies such as Wilmington, Delaware-based DuPont and Yamaguchi, Japan’s Ube.

The company recorded all-time highs both in terms of sales and net profit in the first quarter on solid demand for its product. It trades on Kosdaq but is planning to become a Kospi company.

The Korea JoongAng Daily sat down with Kim Tae-lim, CEO of PI Advanced Materials, to discuss the polyimide business and strategies going forwards

Q. The technology sector is booming driven in part by pandemic-induced demand for electronics goods and appliances. How did that affect the business at PI Advanced Materials?

A. We have recently reviewed the financial and production records for the period between last July and June 2021. PI Advanced Materials produced 4,115 tons of polyimide film during the period, an all-time-high in our corporate history. The amount is also higher than the factory’s design capacity of 3,900 tons.

The upbeat performance is primarily attributed to robust demand for electric vehicles and electronic appliances and our efforts to boost operational efficiency. Products like computer monitors and high-end displays sold well, while sales of smartphones were relatively weak.

With the promising market outlook going forward, we announced the decision to add two more production lines by investing around 70 billion won for each.

If those facilities go up and running around the second half of 2023, I believe we could push up the market share to hit 40 percent from the current 31.2 percent.

A few of specialized corporations with long corporate histories in Japan and the United States have had a strong grip on the polyimide-based materials market. What kept PI Advanced Materials staying ahead of those competitors in terms of market share for nearly 10 years?

I think the foundation lies in our focus on research and development capabilities and operational excellence to optimize production capacity. Our factories in Jincheon, North Chungcheong, and Gumi, North Gyeongsang operate nearly at full capacity.

Another factor is our strong commitment to R&D as we try to move preemptively. Long before OLED displays and EVs become popularized, the company started researching and developing the films tailored for the applications. And we approach the manufacturers to suggest the range of polyimide materials they can tap.

The increased spending on R&D – expanding five times over the past four years – is a testament to our efforts.

To further strengthen the competitiveness in research, we are building a new R&D center in the Jincheon factory.

Is polyimide film for smartphones the mainstay product?

So far, yes, as it accounts for about 70 percent of sales. But we are trying to increase the portion of other polyimide materials like varnish or tapes for EV batteries. When I first came to the company as CEO, the company’s dependence on polyimide film - especially for the use of smartphones - was far higher. Then, I faced a question that begs an answer: Can this structure lead us to achieve sustainable growth? To attain sustainable growth, I thought we need to become an integrated materials producer with specialty product lineups.

Can you explain the strategy?

In the first phase of strategy, which ended last year, we strived to further increase the market share of polyimide film by diversifying its applications while laying a foundation to branch out into the new materials. The film’s traditional applications were flexible printed circuit board (FPCB) and graphite designed to dissipate heat from smartphones.

On top of them is chip-on-film (COF) products. A COF is deployed in semiconductor products to boost their capacity to transmit video signals.  Before our entry, Japanese companies dominated the production of polyimide films for COF. PI Advanced Material’s market share in the sector is not so significant – at less than 5 percent. But we aim to increase the share to more than 30 percent in mid to long term.

Another area is 5G networks with modified polyimide film designed to prevent the loss of data in transmission. Since the network standard is still under development in many parts of the world, we assumed we can have a first-mover advantage if we move swiftly. The film is used for antennas to receive 5G signals.

The company also looks at the rise of foldable smartphones as an opportunity, because the films can be used on the circuit board and as a sheet designed to mitigate creases.

As for new materials other than films, we started producing polyimide varnish for chips, EV motors and displays. Of them, the EV motor segment holds great potential because we have become a major varnish supplier for EVs from Hyundai Motor and Kia since last year. Since automakers at home and abroad plan to expand the number of EV models, we believe that demand for the insulating varnish will keep rising.

What is the second phase?

The main pillar of the change that comes with the second phase of strategy will be a creation of a new department. By doing so, we will segment the divisions by application, for instance for mobility or thermal management instead of dividing divisions by the type of material. The change is intended to dig into new, more high-tech applications using polyimide materials.

For instance, we are developing transparent varnish that can be applied to transparent organic-light emitting diode (OLED) displays. There are transparent varnishes out there, but most of them have a higher yellow index than ours. Our transparent varnish records less than 3, which means it is very clear. But other varnishes retailed have a yellow index ranging from 3 to 5.
We also plan to develop photosensitive polyimide (PSPI), which are 100 percent imported from other countries. The PSPI has a wide range of applications- from flexible printed circuit board to chips including both memory chips and processors.

I’ve also noticed that many of the key parts used in high-end display panels can be made with polyimide processing technologies that we already secured, although most of them are imported.

So, the sector will be our next destination to explore. In the long-term, we will look into a new range of materials other than polyimides to become an integrated materials company.

Korea still at the start of the road to dying well