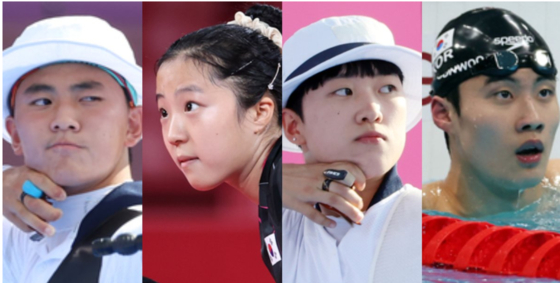 
A new generation of Korean athletes at the Tokyo Olympics aren't taking the kind of online abuse their predecessors put up with, challenging the idea that Olympians, as national role models, should keep their feelings to themselves.

In response to a stream of abusive messages she received on Instagram, twenty-year-old women’s archery gold medalist An San reposted the messages to her Instagram stories, in the process revealing the mailer’s ID.

The five messages, which all contained a single word – byungshin, or moron – were met with a tart and triumphant response from An: “Firing off angry messages from your bedroom corner vs. me winning two Olympic gold medals.”

An posted a screenshot of the text chain, challenging her abuser: “If you’ve read my messages, can’t you at least respond?”

Previous Olympians may have felt less free to respond to criticism or scandal. Korean athletes at this year’s Olympics, most of whom were born after 1997 and thus belong to so-called Generation Z, are proving to be less inhibited as representatives of the country and freer to react as individuals.

During the 2018 PyeongChang Winter Olympics, it was not uncommon for Korean athletes to temporarily surrender their phones to coaches to keep them from seeing negative feedback or online criticism out of fear it could affect their performances.

The new generation of Olympians, however, are not shy about expressing their genuine feelings on social media after victory -- and also after defeat.

Headlines called swimmer Hwang Sun-woo’s seventh place finish in the men’s 200-meter freestyle race on Tuesday “disappointing.” The 18-year-old Hwang wrote unashamedly on social media, “Because so many people cheered me on, I had a great time swimming [in the race].” Previous generations of Korean Olympians apologized for not winning a medal and promised to do better.

Seventeen-year-old table tennis player Shin Yu-bin responded in a similar manner after losing to Hong Kong’s Doo Hoi-kem in the third round of the women’s singles on Tuesday. Shin had been tipped to win gold, having become the youngest winner of an International Table Tennis Federation mixed doubles title at 15. Shin responded to the outcome of the match on social media, saying, “I had a great match thanks to everyone’s encouragement. It was a little disappointing but I will get past it soon.”

Double archery gold medalist Kim Je-deok, who lost his bid for an unprecedented third gold medal in archery at a single Olympics on Tuesday, said simply in a media interview, “After the match, I felt a huge sense of relief.”