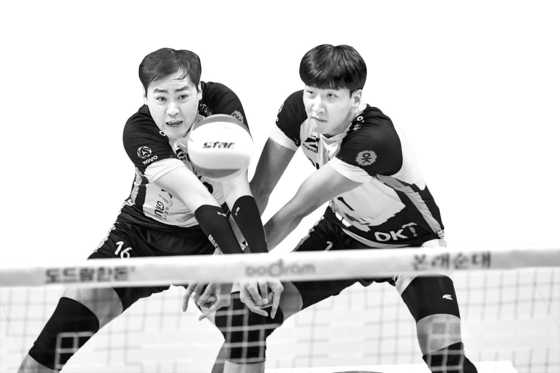 Volleyball athletes Shim Kyoung-sub, left, and Song Myung-geun, right, have been recently embroiled in accusations that they bullied schoolmates in their high school and middle school. Both have apologized to the victims as of Saturday. [YONHAP]

Two popular volleyball athletes, Song Myung-geun and Shim Kyoung-sub, are in trouble for bullying fellow students in their high school and middle school.

“We would like to apologize to the fans, for disappointing them with the news regarding our club’s athletes Song Myung-geun and Shim Kyoung-sub,” OK Financial Group OKman Volleyball Club said in a statement Saturday.

Earlier Saturday, a schoolmate of Song wrote a post online alleging that he was bullied by a group of older students when he was a freshman at Songlim High around 10 years ago. He alleged that Song was part of the gang that forced him to sing and physically abused him. He said he was hit in his crotch area and had to undergo an operation.

On the same day, the victim uploaded another post saying he had been contacted by the perpetrators.

“Song Myung-geun did have a conflict with the victim during his time as a student at Songlim High School [...] he at the time supported the medical bills for the surgery involved," OK Financial Group OKman Volleyball Club said in its statement. "He apologized to the victim at the time, but is trying to get in touch with the victim now to apologize again.”

Shim was accused of bullying a schoolmate at Songlim Middle School.


“Shim has also conveyed his apology to the victim [...] Both athletes have inflicted unforgettable pain on the victims at a time when they were young and didn’t realize the severity of their violent actions,” the club said. “We would like to convey our heartfelt apology to the victims once more. The club will be coming up with measures to train our athletes so that they do not make such mistakes.”

Last August, baseball club NC Dinos rescinded a draft pick of pitcher Kim Yoo-seong after he was embroiled in accusations of bullying a teammate when he was in middle school.

Accusations of bullying have increased in recent years as seen in the controversy involving speed skaters Kim Bo-reum and Noh Seon-yeong in 2018, as well as the suicide of triathlete Choi Suk-hyeon last June 26, a few days after she filed a criminal complaint with police against four individuals from her former team from 2017 to 2019 — the coach, team doctor and two senior athletes — after suffering years of systemic verbal abuse and physical assault.

“Change needs to happen to the way the athletes are trained,” said Kim Yoo-kyum, a professor of sports education at Seoul National University. “Instead of putting them into these boarding houses, where they learn to compete rather excessively, the athletes need to undergo normal schooling with other students and learn basic morality and ethics before they start to train.”

Kim Jeong-hyo, an adjunct professor of sports philosophy at Seoul National University, said that the bullying scandals may be part of growing pains for Korea as a society.

“The younger generations have higher standards for what is ethically and morally right,” Kim said. “People bullied at schools will likely speak up when they see the people who once bullied them rise as stars.”

Following the death of triathlete Choi last year, the National Assembly amended laws about punishment for coaches who abuse athletes and to expand channels through which athletes can request support and counseling.