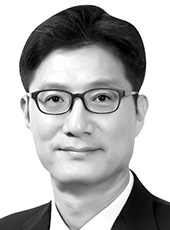 Kim Jung-ha
The author is the political news director at the JoongAng Ilbo.


Presidential campaign platforms are mostly a list of pipe dreams. Few voters care to study them. They have so little belief in the promises it is barely cynicism.

Every once in a while a platform has one plank of “killer content” that defines the soul and identity of the candidate and the political party. President Moon Jae-in’s promises about real estate in his 2017 campaign could be one.

At the time, Moon vowed to deliver 170,000 units in public rental housing annually and 300,000 units separately for the young. He also pledged to carry out urban renewal projects and a society-uniting housing policy. In short, he wished to guide people without homes to choose public rentals instead of buying homes, and renew old neighborhoods to block any attempt at reconstruction and redevelopment of mass-scale apartment complexes. The tenant’s right to renew long-term leases was also promised at the time, which is blamed for the current rent crisis across the country.

It has been a long-held belief among the liberals that chasing profits, not an undersupply, is the cause of inflated housing prices and insecurity among renters. They are also convinced that only strong regulatory measures can dampen demand and stabilize the real estate market.

A doctrine that defies the free market was implemented in public policy under former liberal President Roh Moo-hyun and brought about havoc in the property market. When presidential candidate Moon vowed to succeed the real estate policy of the former Roh administration, a spike in apartment prices was foreseeable. But at that time, our society was too engrossed with the impeachment and ousting of a sitting president to pay heed to the doomed-to-fail real estate platform of Moon.

The biggest stumbling block to the ruling Democratic Party (DP)’s hopes to extend their control is sky-high apartment prices. Presidential hopefuls from the DP should be vying to do the opposite of their boss’s current policy. Yet all of them vow to be tougher on the market. Front-runner Gyeonggi Governor Lee Jae-myung wants to allow the government to control housing prices by establishing a public institution overseeing housing trade in the market. His scheme is equivalent to the past idea of the government purchasing a massive amount of rice from farmers and rationing it out at cheaper prices to regulate price hikes.

Lee Nak-yon, former prime minister and ex-chief of the DP, has even proposed three bills aimed at restricting individual and corporate land ownership. He promises to cap land ownership in Seoul and the capital region to 400 pyeong (1,322 square meters or 14,233 square feet) per person and 600 pyeong in other cities and 800 pyeong in the rest of the country. Any land one owns beyond the limit should be disposed or developed within a certain period. The Constitutional Court ruled in 1999 that a law that puts an upper limit on individual land ownership was unconstitutional. Government-enforced divesture of land can violate the civilian rights to properties. Such ownership restriction will only harden housing supplies.

Choo Mi-ae, former justice minister, insists on raising the property ownership tax and another former prime minister, Chung Sye-kyun, pledges to supply 1.3 million apartments for public rental only. All of these ideas have been carried out or floated by the Moon administration. Only one candidate, Rep. Park Yong-jin of the DP, proposes to increase housing supplies from the private sector.

The DP has already made two disastrous mistakes in real estate policy. All of its presidential candidates admit the government’s real estate policy was a failure. Then, why don’t they veer away and come up with a different approach? Are they taking the same path as they are vying in the primary race, or do they really believe their attempts can succeed? The winning party has the right to proceed with the campaign pledges. Voters therefore must study their platforms carefully.