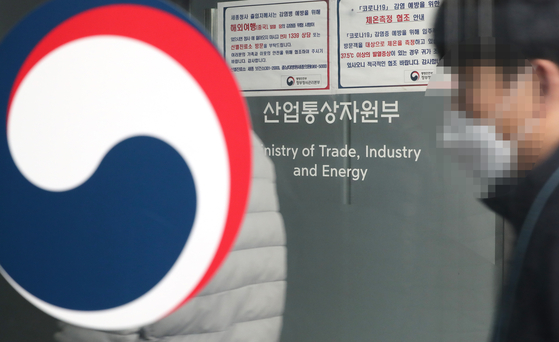 The Ministry of Trade, Industry and Energy office in Sejong. The government has decided to expand the ministry's energy department including a new energy vice minister to bolster its pledg of carbon neutrality by 2050. [YONHAP]

The government is creating a new vice minister position for the trade ministry who will concentrate on energy and particularly Korea’s pledge of carbon neutrality by 2050.

According to the Ministry of Trade, Industry and Energy and the Ministry of Interior and Safety on Tuesday, a proposal to make several reforms of the government’s energy department was approved during the cabinet meeting.

The changes will go into effect Aug. 9.

Under the new organization, the Ministry of Trade, Industry and Energy will have three vice ministers, one more than other government ministries.

Under the new organization plan, the energy department will add 27 employees, bringing its total to 250.

It will add a department to handle electricity innovation and hydrogen economy policies, which are key priorities of the Moon Jae-in government.

Another new department will take over the work of the Electric Power Division and Electricity Market Division to focus on power supply, renewable energy and related issues.

“Carbon neutrality is part of a new global order that no longer can be avoided,” said Moon Sung-wook, Minister of Trade, Industry and Energy. “The ministry through the creation of a new energy vice minister and reinforcing related departments and manpower, will speed up energy system innovation in realizing carbon neutrality by 2050.”

There has been debate over the creation of a new vice minister position with less than a year left in Moon's term.

Some in the opposition argue that Moon is apologizing to the ministry for all he has put it through, especially with his government’s policy of phasing out nuclear power and all the controversy that has attended it.

Several high-ranking government officials including former Minister Paik Un-gyu are being investigated for possibly misleading the nation to comply with that policy.

The expansion of the energy department is supposed to please ministry employees, whose morale has been hurt.

Defending the powers that be