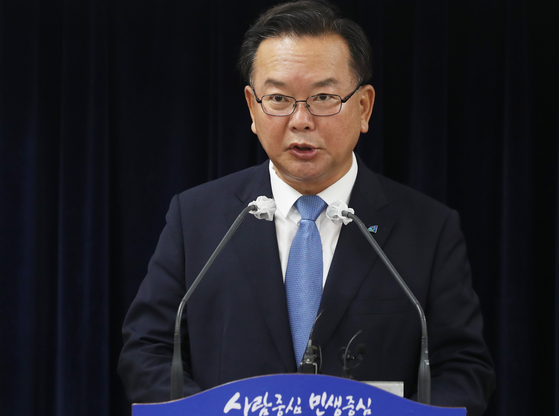 Moon replaced top officials in his cabinet and the Blue House secretariat to acknowledge his party’s crushing defeats in last week’s by-elections, including mayoral races in Seoul and Busan. That rout, in addition to Moon's plummeting approval rating, is considered a crucial political setback for the ruling Democratic Party (DP) ahead of next year’s presidential election.

“Kim is a politician known for his devotion to overcoming regionalism, reform and unity,” Presidential Chief of Staff You Young-min said. “He was widely supported by the people while serving as minister of interior and safety for his efforts to protect the public from various natural disasters and major accidents.”

The 63-year-old politician won his first legislative victory in 2000 in Gunpo, Gyeonggi. He was reelected in 2004 and 2008, but decided to run in Suseong A District of Daegu, a traditional stronghold of the conservative opposition, in 2012 and was narrowly defeated. In 2016, Kim ran again and scored 62.3 percent to win his fourth legislative victory. It was the first time in 31 years for a DP candidate to win a seat in Daegu.

From July 2017 to April 2019, Kim served as minister of interior and safety for Moon's administration. He sought reelection in Daegu last April , but lost to Joo Ho-young, the current floor leader of the People Power Party.

Noh Hyeong-ouk, minister for government policy coordination at the Prime Minister’s Office, was nominated minister of land, infrastructure and transport. Noh will replace the trouble-plagued Byeon Chang-heum, who served in the post for 109 days as of Friday.

You said Moon expects Noh to successfully deal with the scandal around government workers and politicians using inside information to make real estate investments. “We believe he will be able to completely overhaul the Land Ministry and the Land and Housing Corporation [LH],” You said. “We also expect him to swiftly complete pending tasks of stabilizing the real estate market and prompting balanced development of the country.”

Moon Sung-wook, deputy head of the Office for Government Policy Coordination, was nominated as minister of trade, industry and energy.

Park Jun-young, vice minister of oceans and fisheries, was nominated to head the ministry.

All cabinet nominees must undergo National Assembly’s confirmation hearings. While the president can still appoint a minister without the legislature’s blessing, the prime minister nominee must pass a vote. 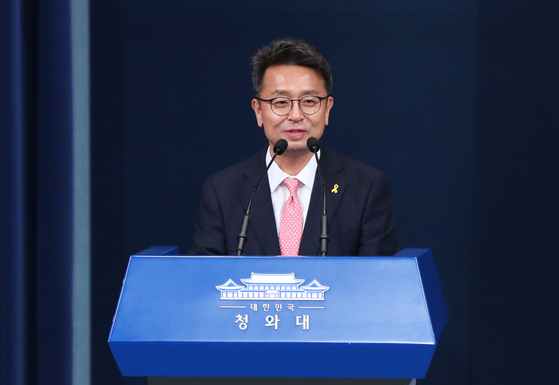 Ki Mo-ran, professor of preventive medicine at the National Cancer Center, was named to a newly created post of secretary for disease control and prevention.

The reshuffles of the cabinet and the Blue House came as Moon’s popularity plummeted over recent weeks.