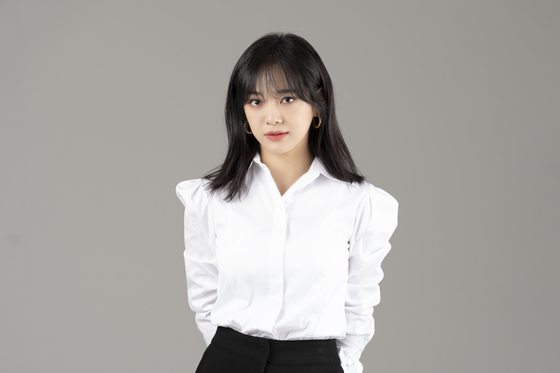 Singer and actor Kim Se-jeong made her musical debut in ″Red Book″ this year. [JELLYFISH ENTERTAINMENT]


“I am a person who speaks for myself, leaving a black stain on a crystal clear era where I must disappear because of who I am.”

"Red Book," which is currently being performed at Hongik Daehangno Art Center until Aug. 22, is receiving attention from the public because it is still rare for a musical to have a female protagonist that remains on stage until the final curtain falls.

Twenty-five-year-old Kim debuted as part of girl group I.O.I, which was formed with the finalists of the first season of cable channel Mnet’s K-pop audition show “Produce 101” in 2016. After the group disbanded in 2017, Kim debuted as part of girl group Gugudan. Although "Red Book" technically marks her musical debut, Kim is ready to continue captivating audiences with her brimming positivity as seen through her various variety show appearances.

“My asset?” Kim laughed during a recent interview with the JoongAng Ilbo, an affiliate of the Korea JoongAng Daily. “It’s embarrassing for me to say, but I believe it’s my loveliness. Also my bubbly image and energy.”

After Gugudan disbanded earlier this year, Kim focused on her career as a solo artist. While she said it's lonelier, she also said she's been enjoying the freedom of being able to express herself whenever and however she likes. Kim explained why she chose to give theater a try after her role in OCN’s television series “The Uncanny Counter” (2020-21) came to an end in January.

“I just really wanted to try theater acting,” Kim said. “I felt that there were a lot to learn while being on stage, as I saw from [actor and co-star of ‘The Uncanny Counter’] Yoo Jun-sang’s role in [musical] ‘The Days.’ I begged my agency to get me a role in theater. If not a musical, I probably would’ve tried being in a play. Plays are so charming too. I’m really greedy. I want to try everything,” Kim laughed.

Kim landed her first role in the musical “Return: The Promise of the Day,” however due to the pandemic the show was forced to go online meaning “Red Book” marks her first time performing in a musical on stage.

“Sometimes I cried [while practicing] because I was frustrated with myself,” Kim said. “But my senior co-stars helped me by inviting me to a study group on acting and I’ve been learning every day. I also started taking singing classes, and there’s so much to learn that now I have a lot on my plate. It’s quite fun trying to figure out what to do next.” 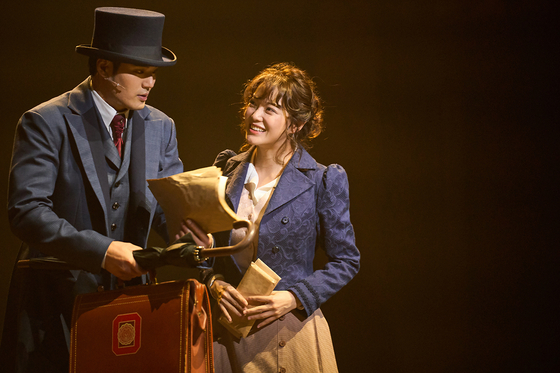 
“Red Book” is about people with strong personalities, fighting against prejudice and discrimination because they do not want to be confined within a conservative society.

“I think I’m like Anna,” Kim said. “I have a weird personality. I’m wild and I get ‘too’ happy, and I’m pretty frank, like Anna. I’ve always wondered, why do people think it’s peculiar to be honest? Maybe I’m rebelling against such prejudices too.”

Ever since her debut in 2016, Kim's tough personality has made her stand out among the other members of the girl groups she's been part of, but that hasn't always been a good thing.

“Once in a variety show, I said that I had my first kiss when I was in high school. It was in headlines all over the place afterward and my agency was furious with me. What can I do, though? I can’t go back in time, and I can’t just lie. I feel less embarrassed when I’m honest, because only then can I also trust others. Like when I’m talking to you [the reporter], I trust that you will write the article about me as I am, since I am being straightforward with you right now.”

When asked how she found the kissing scenes in "Red Book," Kim clapped her hands happily and exclaimed, “That’s the beauty of this show.”

“Did you know the kiss is different in every performance? It was Cha’s idea that it would be more unnatural to reenact the same kissing scene every time, so we decided to go with the flow. Sometimes we kiss eight times, or sometimes it’s just one long kiss. It varies by how me and my co-star are feeling in the moment. This is what makes the kissing scenes so special.”

Kim is just as positive in person as she is portrayed in the media. She is full of confidence, ambition and pure energy.

Kim has a small yet definite dream — to make music about the darkest emotions people feel as humans, like jealousy or inferiority — feelings that people are ashamed to admit to.

“I think having dark emotions motivates people to become better versions of themselves, like how jealousy can stimulate you to work harder,” said Kim. “It’s natural to feel them but people usually don’t want to embrace them. I still want to try singing about them. Why? Because that’s how I feel. I always want to be honest in front of the public, and I think I will become more comfortable with that by confronting my deepest and darkest emotions.

“Playing Anna in ‘Red Book’ is a stepping stone, I think. People might think it’s a taboo for an idol to appear in a story about a sexy woman, but I’m trying to break the ice on these things. I believe I’m taking one step closer to my dreams [through Anna].”