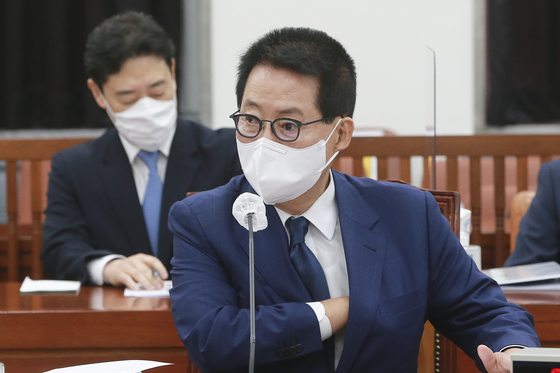 
Remarks made by Park Jie-won, director of the National Intelligence Service (NIS), indicating that Pyongyang would take “corresponding measures” if joint military drills are halted and a ban on luxury good imports to the North is lifted have stirred controversy.

Park told the National Assembly’s intelligence committee Tuesday, "I understand the importance of the Republic of Korea-U.S. exercises, but it is necessary to consider being flexible in regard to the joint drills in order to maintain the momentum of dialogue and achieve the larger picture of North Korea's denuclearization.”

Pyongyang has also called for the easing of sanctions on imports of luxury goods and refined oil, and on mineral exports as a precondition to resuming any negotiations with the United States, said Ha on Park’s briefing.

When asked by Ha to clarify, Park said luxury goods such as Western liquor and suits were not just for the consumption of North Korean leader Kim Jong-un but were a “daily necessity” for Pyongyang’s elite.

His remarks were interpreted as attempting to justify North Korea's attempts to import luxury goods in violation of United Nations sanctions.

Imports of luxury good to North Korea have been banned by the UN Security Council since 2006.

The NIS also said that the restoration of inter-Korean communication lines last week came upon the request of Kim Jong-un, according to intelligence committee lawmakers. The two sides have been using the hotlines twice daily since they were restored on July 27. Pyongyang unilaterally severed communications 13 months ago.

The South’s spy agency concluded that the restoration of the hotlines showed Pyongyang’s intent to improve inter-Korean ties. It added that the North had expectations for the South to play a role in North-U.S. dialogue.

Park also said that North Korea seems unhappy that it has not conducted a nuclear test nor launched an intercontinental ballistic missile (ICBM) in the past three years, but that the United States has not taken any corresponding measures.

He added that such distrust has to be resolved in order for the North to return to dialogue, indicating that the suspension of joint drills could be one such example.

Rep. Kim said that Park analyzed that North Korea is “expected to make a decision on its next move while closely monitoring South-U.S. consultations and our response.”

Seoul and Washington are expected to hold an annual joint exercise later this month, which has been strongly protested by Pyongyang.

Kim Yo-jong, the younger sister of North Korea's leader, warned in a statement Sunday that Seoul-Washington military exercises could cast a cloud over inter-Korean relations, indicating that the “choice” was up to the South to make a “bold decision.”

Some of Park’s remarks have resulted in immediate clarifications from related South Korean ministries and criticism from opposition lawmakers that the NIS is overreaching its authority on unification policy and neglecting security matters.

A Unification Ministry official told reporters Tuesday that the decision to revive the inter-Korean communication lines was based on “sufficient consultation and agreement” between the two Koreas.

Seoul’s Ministry of Foreign Affairs said Tuesday, “There haven’t been any discussion of sanctions exemptions during the South Korea-U.S. consultation process,” addressing the matter of the lifting of the luxury import ban on the North.

Rep. Thae Yong-ho, a former North Korea diplomat who defected in 2016 and a first-term lawmaker for the PPP, told the JoongAng Ilbo Tuesday, “When luxury goods are brought into North Korea, they will be sold to Pyongyang's emerging bourgeoisie to fill Chairman Kim Jong-un’s pockets or be handed out to top officials.”

The U.S. Defense Department confirmed Tuesday that Seoul has not made any request to consider suspending the upcoming joint military exercise.

John Kirby, spokesman for the U.S. Department of Defense, said in a briefing, "That hasn't happened," when asked by a reporter what Washington intends to do if asked by Seoul to suspend the combined exercise.

He added, “Everything we do from a military perspective is done in close coordination with our South Korean allies. We're together as we make these decisions.”

A Blue House official told reporters Wednesday that President Moon Jae-in has requested the Defense Ministry in a meeting with military commanders to “carefully consider various factors” in regard to the joint exercise, and that Seoul's Defense Ministry is in consultation with quarantine authorities and the United States on the current Covid-19 situation and other “realistic conditions.”

In turn, Rep. Ha in turn pledged Wednesday to prevent the NIS from interfering in unification and foreign policy matters.

Ha said in a statement posted on social media Wednesday, “I will correct the wrong practice of the NIS neglecting security and pretending to be the unification minister by night."

He continued, “The NIS director, responsible for North Korea espionage operations, is interfering in unification policy and appeasing Kim Jong-un and his sister.”