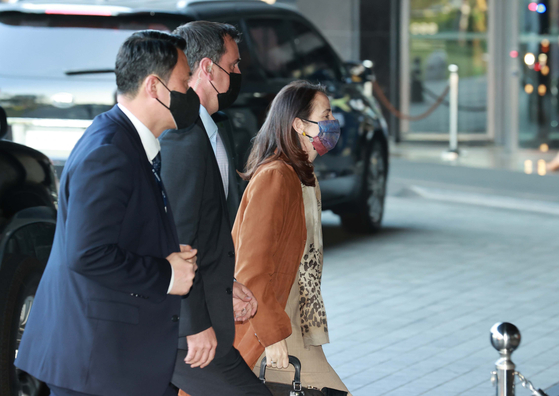 U.S. Director of National Intelligence Avril Haines, escorted by bodyguards, enters a hotel in central Seoul Wednesday after flying in from Tokyo earlier that day. [YONHAP]


The intelligence chiefs of Seoul, Washington and Tokyo held talks in Japan Wednesday to discuss North Korea policy and other relevant geopolitical issues, according to diplomatic sources.

The Joe Biden administration has also been calling to strengthen cooperation with its Asian allies amid the deepening Sino-U.S. rivalry. The spy chiefs are thought to have discussed the results of the U.S. review on its North Korea approach, along with matters related to China.

Seoul and Tokyo have struggled to overcome deteriorated bilateral ties stemming from deep-rooted disputes over historical issues, namely over compensation of forced laborers and the Japanese military’s wartime sexual slavery victims, euphemistically referred to as "comfort women." They also have an ongoing trade spat over Japan’s export restrictions on Korea, imposed since July 2019 and seen as retaliation to the Korean top court’s rulings siding with wartime forced labor victims.

Park during his Japan trip was expected to hold a phone conversation with Toshihiro Nikai, the secretary general of Japan's ruling Liberal Democratic Party and a powerful supporter of Suga. Park and Nikai have had friendly ties spanning two decades as they served as ministers under previous governments.

Immediately following the trilateral talks in Tokyo, Haines arrived in Korea Wednesday afternoon at around 3:30 p.m. at the Osan Air Base in Pyeongtaek, Gyeonggi.

Haines is expected to visit the demilitarized zone at the inter-Korean border Thursday. She may also meet with President Moon Jae-in and Suh Hoon, director of the Blue House National Security Office.

Haines is likely to discuss with Seoul officials the North Korea issue and preparations for the first summit between Moon and U.S. President Joe Biden scheduled for May 21 in Washington.

Haines is the first female director of national intelligence, in charge of heading the U.S. intelligence community and tasked with producing the president's top-secret daily briefs.

This marks the latest out of a series of trilateral meetings between senior South Korean, Japanese and U.S. officials in the past two months.