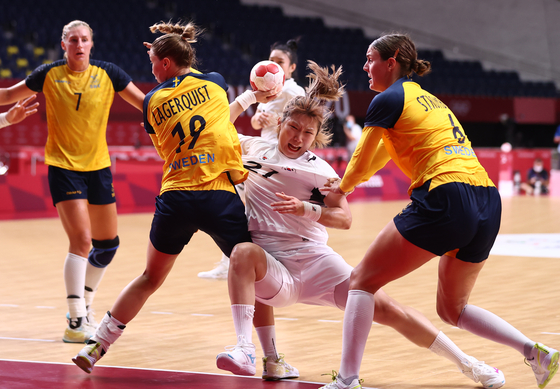 
With a 39-30 loss in the quarterfinals to Sweden, the Korean women's handball team ended its journey at the 2020 Tokyo Olympics.

It was a difficult end to a difficult tournament for Korea on Wednesday evening at Yoyogi National Stadium in western Tokyo.

It became clear very early on that Korea was in for a rough game. At the 10-minute mark, Sweden was already leading by five points, with the scoreline at 8-3. By the 20-minute mark, the gap had widened to 16-8. Sweden's momentum felt insurmountable, whereas Korea's play as a whole felt limp.

Efficiency on the attack was perhaps the greatest difference. Over the first half, Sweden landed 78 percent (21/27) of its shots, while only 54 percent (13/24) of Korea's attempts at goal bore fruit.

Not much changed at the beginning of the second half, and after seven minutes of the same, head coach Kang Jae-won called for a timeout telling his players to play with more passion.

Kang's pep talk seemed to have little effect initially — the gap widened further, with Sweden's offense showing no signs of relenting. In the final 10 minutes of the match, however, Korea eventually did start to show more spirit, although the game by then had essentially been decided. Kang Kyung-min alone scored eight goals in the second half alone.

The final result was by no means a shocker, as the match had been expected to be a tough one.

Korea struggled for the majority of the preliminaries and only advanced thanks to Japan losing to Norway in the final match of Group A and securing Korea's berth to the quarterfinals. Sweden, on the other hand, had coasted through Group B in first place with three wins, one draw and one loss.

In all, this quarterfinals finish was a decent showing for Korea, considering how the squad's plans to train in Europe for much-needed match experience were thwarted due to the Covid-19 pandemic, and how many injuries plagued the roster leading up to the event.

Korea is the only non-European team to have made the quarterfinals.