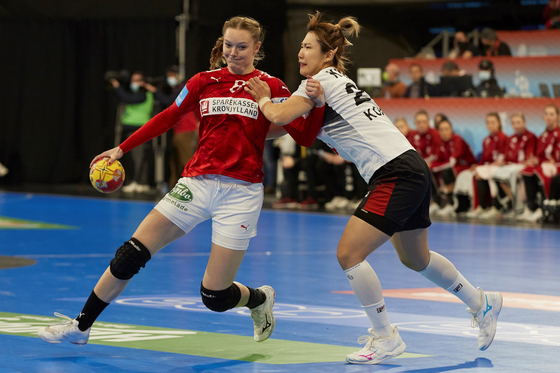 Kim On-a, right, in action against Caroline Hansen of Denmark during the preliminary round group F handball match between Korea and Denmark at the 2021 World Women's Handball Championship in Granollers, Barcelona, Spain, on Monday. [EPA/YONHAP]


The Korean national handball team lost to Denmark at the 2021 IHF World Women's Handball Championship at Palau d'Esports de Granollers in Granollers, Spain on Monday, but will still advance to the next round as the runner-up in Group F.

Korea was placed in Group F alongside Denmark, Tunisia and the Congo, and started playing the 2021 IHF World Women's Handball Championship on Thursday. After beating the Congo 37-23 and Tunisia 31-29, Korea dropped their third match against Denmark 35-23 to take the runner-up spot.

It was evident from the start that world No. 10 Denmark was the stronger team. Five minutes into the match the two teams were tied at 2-2 but three goals for Denmark quickly put Korea on the back foot for the rest of the game.

Korea earned their spot at the championships at the 2021 Asian Championship in Jordan this September, alongside Iran, Japan, Kazakhstan and Uzbekistan. At the 2021 Asian Championship, Korea took the gold medal after topping the group stage with four wins against Kazakhstan, Hong Kong, Uzbekistan and Singapore. Korea took a decisive 46-21 win against Iran in the semifinals, then beat Japan 33-24 in the finals.

Before the Asian Championship, Korea reached the quarterfinals at the Tokyo Olympics, but missed out on a medal after a 39-30 loss to Sweden. Korea struggled in the preliminaries, losing their first match of the Games to Norway then the second to the Netherlands, before getting a win against Japan. Korea lost to Montenegro and drew against Angola. Korea advanced to the quarterfinals thanks to Japan losing to Norway.

Korea will next face the Czech Republic on Wednesday.