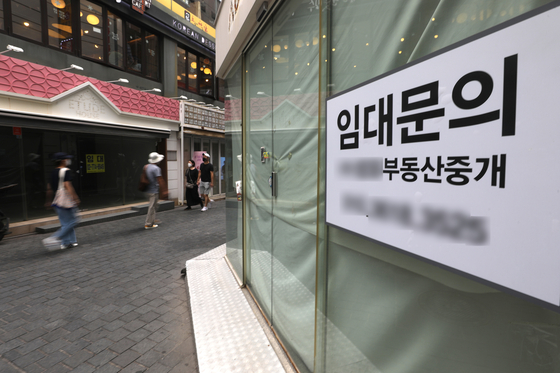 A shop in Myeong-dong in central Seoul is shut down on Wednesday. Korea's working population of self-employed and small business owners shrunk to a 39-year-low in June. [NEWS1]

Korea's working population of self-employed and small business owners shrunk to a 39-year low in June.

Self-employed and small shop owners accounted for 20.19 percent of the total working population in June, the lowest figure since July 1982, when the Korea Small Business Institute and Statistics Korea started compiling data in its current form.

The lowest figure previously was 20.2 percent in December 2019.

Self-employed and small business owners identified in the survey include those who have employees as well as those who work on their own.

The total number of people working in Korea has been on a recovery trend since early this year after experiencing a dismal 2020. The number rose for four consecutive months between March and June especially, with a surge in salaried workers.

The number of self-employed, however, didn’t easily recover. It was on a downtrend for 15 straight months from March 2020 to May. It was only in June that the number inched up.

In June, the working population increased 2.2 percent year-on-year but the number of self-employed increased by only 0.5 percent.

“Small business owners who hire employees have been decreasing for 30 consecutive months,” said Noh Min-sun, a researcher at the Korea Small Business Institute.

“Declines in that segment contributed to a slow recovery of the number of self-employed and small business owners in Korea."

The self-employed and small business owners have taken a particularly sharp hit from intensified social distancing measures due to the coronavirus pandemic. Many run restaurants and bars.

Social distancing measures that prohibit groups of more than two people from dining out after 6 p.m. will continue to take a toll on them.

A heat wave this summer has driven up produce prices, which eats into the profits of small restaurants.

The price of spinach rose 53 percent year-on-year as of end of July to 11,473 won per kilogram, according to Korea Agro-Fisheries & Food Trade Corporation. The price of one kind of lettuce rose by 53 percent, and cucumbers by 11 percent.

“The situation for self-employed people was already bad, but its severity has become worse with Covid-19,” said Kang Sung-jin, economics professor at Korea University.

“Small shop owners with employees will also be affected by the increased minimum wage, putting more pressure on labor costs.”