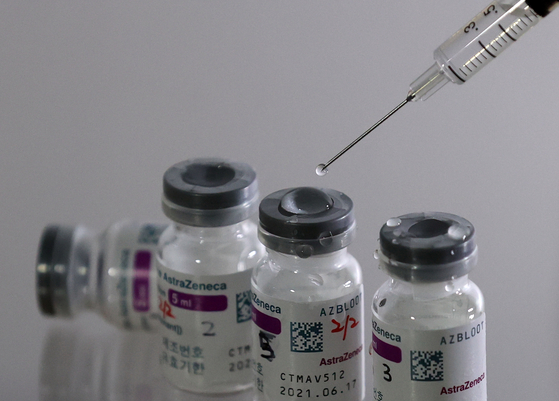 
The government on Friday recognized a nursing assistant, whose body was paralyzed after receiving her Covid-19 vaccination, as a victim of a work accident, the first such case in Korea.

The Korea Workers' Compensation and Welfare Service under the Ministry of Employment and Labor said Friday that an internal review concluded that the nursing assistant should be given benefits and financial compensation under the Industrial Accident Compensation Insurance Act, although the medical causality between the vaccine and her conditions was not clearly identified.

The 45-year-old nursing assistant at a hospital in Gyeonggi was hospitalized with a serious neurological disorder after receiving the AstraZeneca shot on March 12. She was hospitalized after suffering from long-lasting headaches and double vision on March 31 and has remained there since.

She suffered acute demyelinating encephalomyelitis (ADEM), a rare autoimmune disease, and paralysis of her arms and legs.

The corporation said she was vaccinated because of her occupation as a nursing assistant, thus it was decided that her case should be recognized as a workplace accident. Her employer strongly recommended the vaccination, and she received the shot during workhours, the corporation said. 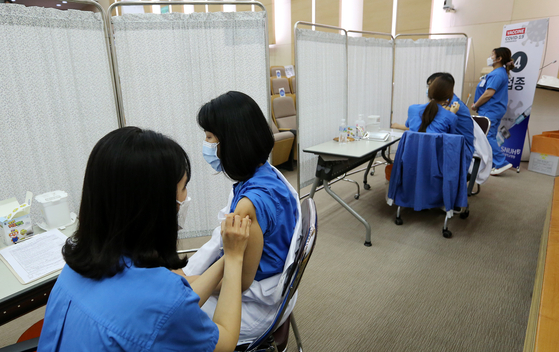 In this file photo, doctors, nurses and nursing assistants of the Seoul National University Hospital receive AstraZeneca shots on March 5, 2021. The hospital vaccinated its 8,300 workers in March. [NEWS1]


The corporation said she had no particular health conditions or genetic disorders that would trigger an abnormal response to the vaccine, but there was a correlation between the time period between when she was administered the vaccination and when her conditions arose.

“The Korea Disease Control and Prevention Agency said there was no precedent nor enough data to recognize her case as an abnormal response to a Covid-19 vaccine, but we also do not have grounds to deny her case as a workplace accident.”

Her case was made public in April by her husband’s online plea, criticizing the government for initially denying her eligibility to receive benefits and compensations for an industrial accident.

After the online petition drew public attention, Moon ordered the health authorities review a support plan for her.