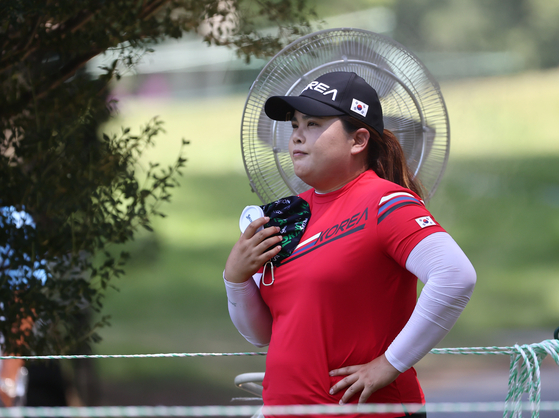 Park In-bee cools down in front of a fan after finishing Hole 17. [YONHAP]


After the third round of the women's golf tournament at the 2020 Tokyo Olympics on Friday, a gold medal finish for Korea seems unlikely, although silver or bronze may be attainable if weather conditions allow the fourth round to take place.

Things have not gone very well at this year's Games for the four Korean golfers at Kasumigaseki Country Club in Saitama, Japan. In the last three days, none of them have managed to do better than three-under-par in any given round.

Kim Sei-young and Ko Jin-young are tied for 10th place at a total of seven-under, 206. Kim cut three strokes on Friday, while Ko only met par.

This puts the two at eight strokes away from the leader, the United States' Nelly Korda, who sits at a total of 15-under, 198. In second place is India's Aditi Ashok at 12-under, 201. Four players are tied at third place at 10-under, 203. A three-stroke difference could very well be overtaken in a round.

Kim Hyo-joo fell down to 18th place with a total of five-under, 208, having only cut one stroke.

Park In-bee played her worst round yet, only meeting par to stay at three-under, 210, sliding further down the rankings to 25th. After her game, the reigning Olympic champion told reporters that although she tends to struggle a lot in one or two events each season, she was crushed that it had to happen at the Olympics this year.

The fourth and final round is scheduled to be played at the same course on Saturday, but storms forecast in Saitama may force officials to cut the event short and award medals based on the three rounds played, in which case no Korean would medal.

As of press time the decision has not been announced.