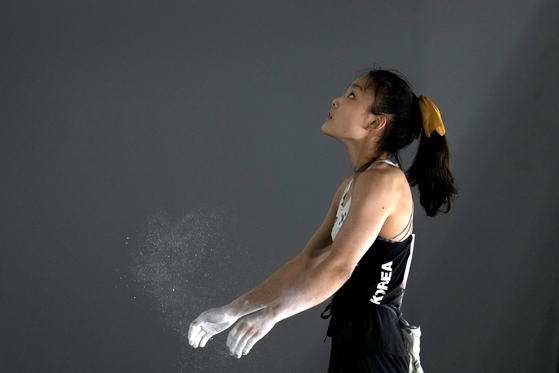 Seo Chae-hyun looks up at the wall as she prepares to compete during the bouldering portion of the women's sport climbing final at the 2020 Summer Olympics, on Friday. [AP/YONHAP]


Korea's Seo Chae-hyun was undone by a fiendish bouldering course in the women's sport climbing finals on Friday, ending the evening in last place despite redeeming herself in the final event.


Sport climbing is made up of three distinct disciplines — speed, bouldering and lead — but at this year's Games, all of them were rolled into a single event. This decision invited controversy as speed requires a distinctly different skillset from the two others. At Paris 2024, speed will be separated.

The gold went to Slovenia's Janja Garnbret, who came in fifth in speed then led the pack in both bouldering and lead for a point total of 5.00. Japan took silver and bronze, with Miho Nonaka coming in second with 45.00 points, and Akiyo Noguchi coming in third with 64.00.

In the qualifiers played on Wednesday evening, Seo proved through a second-place finish that she could make up for her lacking prowess in speed with her comfort in bouldering and excellence in lead.

Seo hoped her game would play out in a similar way in the finals, but things did not go to plan. Her chances of a podium finish were severely dimmed after she placed dead last in speed, then second from last in bouldering. She still could have won a bronze medal had she come in first in lead, but she finished two holds away from first place, ending with 112.00 points.

Due to the unusual multiplication scoring system used in combined sport climbing, missing out on one spot in lead to finish second was the difference between a bronze medal and last place.

Before the Olympics began, some believed that sport climbing would be dominated by athletes from countries in Europe and the United States where climbing and other extreme sports are better known and established. Nonaka, Noguchi and Seo have clearly defied such expectations with their performances.