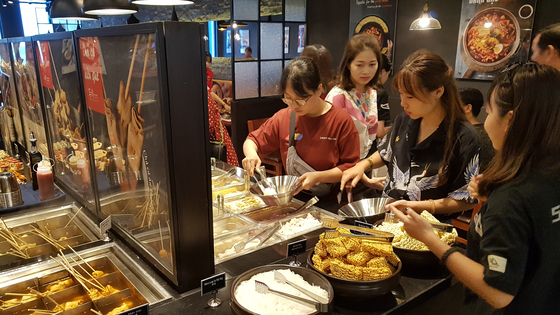 It ain’t all K-pop and kimchi.

Even tteokbokki, a stir-fried rice cake which a chewy texture and served with a spicy and sweet sauce, is gaining popularity overseas, with some makers more than doubling the number of containers of the product they are shipping to some countries to meet the demand.

According to data compiled by the Korea Trade-Investment Promotion Agency (Kotra), exports of rice flour and malt extract totaled at $87.7 million in 2020, up 36.9 percent on year. As tteokbokki does not have its own Harmonized System code, which is commonly used in the export process for goods, it is highly likely that tteokbokki is exported to foreign countries under the two names — rice flour and malt extract — according to Kotra.

In 2019, before the pandemic, the daily number of customers to a Dookki Topokki restaurant in Vietnam was around 700, 99 percent local customers.

The company also operates stores in six other countries: Thailand, Philippines, Indonesia, Malaysia, Taiwan and Singapore. The number of overseas branches total 97 so far, while it has 230 stores in Korea.

This achievement comes fewer than five years since the company opened its first overseas branch in April 2016. 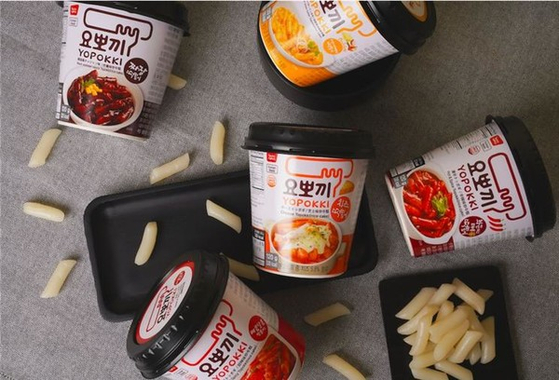 Daegu-based Youngpoong, best known for its Yopokki, an instant cup tteokbokki, generates about 80 percent of its sales outside Korea. It has been exporting its tteokbokki products to about 80 countries, and its exports hit an all-time high of 14.3 billion won ($12.5 million) last year, up 25 percent on year.

Japan has been the largest export market for Youngpoong, taking 28 percent of its exports. Of that, about 70 percent is Yopokki.

The biggest reason for the success of tteokbokki in foreign markets is localized marketing strategies.

The company offers the tteokbokki buffet service at 139,000 vietnamese dong per person. It’s all you can eat, including sauces and side dishes like bibimbap and japchae, or stir-fried noodles mixed with slices of vegetables and meat.

In Philippines, the price is set at 449 pesos ($9.02) per person. The average price of one-serving dish at Asian restaurants in Philippines is around 584 pesos, according to Dookki Topokki.

The tteokbokki maker's goal for this year is to enter more countries, like Australia, Canada and the United States.

"Despite the pandemic, customer demand for Dookki Topokki has been steadily rising in foreign markets," said a spokesperson for Dookki Topokki. "In 2021, we introduced three home-meal replacements [HMR] products and have successfully exported them to Canada, Australia and Hong Kong."

"For countries that are yet to have our buffet restaurants, we aim to increase the awareness of tteokbokki in those countries with our HMR products so that people there become more familiar with it."

Diversity of taste was also a contributing marketing strategy.

Tteokbokki is well-known for its spicy sauce, as Koreans generally use gochujang as the main ingredient. Foreigners are not always so keen on spiciness.

For them, Dookki Topokki offers lots of sauce options, like cream and jajang (black bean). 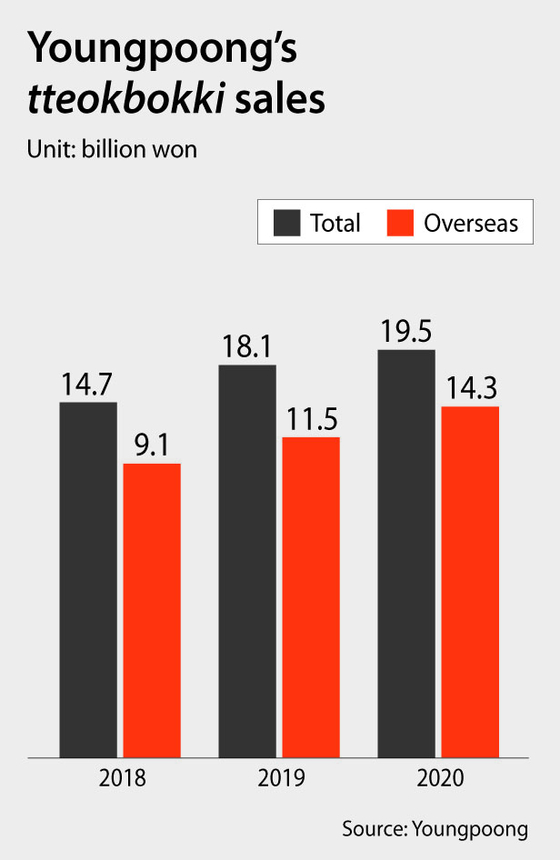 Dookki Topokki offers different side dishes by countries depending on the taste of local people.

Seafood is offered in the Philippines. Beef and pork dishes are offered as side dishes in Taiwan.
In Singapore, Thailand and Malaysia, chicken is available and tropical fruits in Indonesia.

"Although K-food and K-culture are popular worldwide, the most important factor in order to target foreign markets is sharpening the appetites of foreign customers," said Dookki Topokki's spokesperson. "Dookki Topokki allows people to cook their own tteokbokki with their choices of sauces and ingredients, and this was also an another major reason to the success."

Youngpoong said its "own technology that allows its tteokbokki products to stay longer at room temperature" as a key to success in foreign markets.

“Our tteokbokki products are good items to export as we can deliver them to countries that are very far away from Korea, or even countries that still lack refrigeration or freezing technologies,” said a spokesperson for Youngpoong. 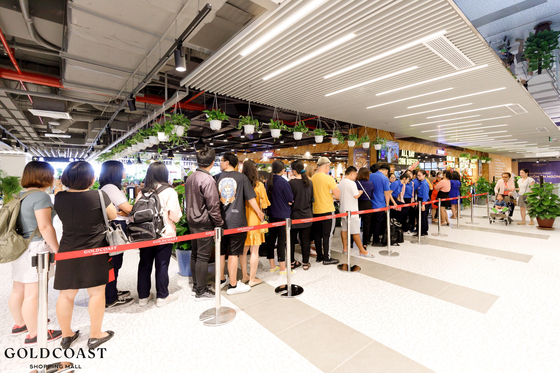 With Korean spicy foods like tteokbokki gaining global popularity, their main ingredient gochujang is also garnering attention. More food companies around the world are scrambling to add products that include gochujang on their menus.

In 2020, exports of gochujang amounted to $301.7 million, up 25.7 percent from the previous year, according to data provided by Kotra.

K-pop stars and influencers get major credit for the increasing popularity of tteokbokki in the world markets.

In June last year, a picture of Jimin of boy band BTS eating tteokbokki in front of a street vendor near Dongdaemun Market, central Seoul, went viral online. The picture spread all over the world using the hashtags on social media like Instagram and Twitter.

Some of Jimin’s magic moved to tteokbokki, and since then, many foreigners have been uploading videos of them trying tteokbokki on YouTube. 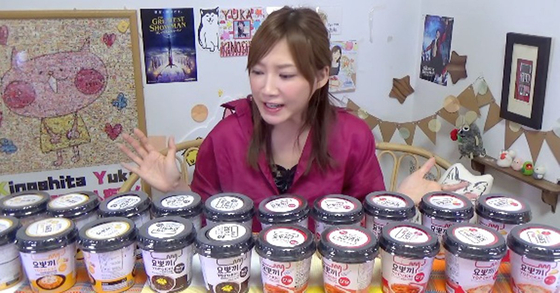 
Kinoshita Yuka, a popular Japanese YouTuber with around 5.5 million subscribers, in early 2018 uploaded a video of her trying Youngpoong’s Yopokki. The video, which introduces Yopokki products of various flavors including cheese and golden onion butter, has more than 11.9 million hits so far.

“It has a very chewy texture which I absolutely love,” Kinoshita Yuka said in the video. “It’s sweet, spicy and very delicious.”

Yopokki exports to Japan significantly rose after the video, according to Youngpoong. Two 40-foot containers were enough to manage the amount of exports before the video, the company said, but it grew to seven soon after the release of the video. At the end of the year, it reached about 13.