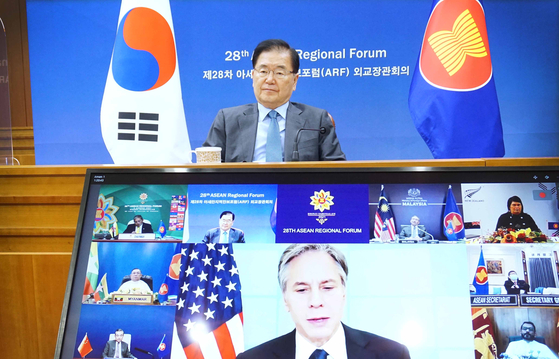 
Seoul will hold its summertime joint military exercise with Washington starting Aug. 16 as planned, but with fewer troops taking part because of the Covid-19 situation, said military sources here Sunday.

Some government officials and lawmakers in Seoul have been calling for a postponement of the drill for the sake of improving inter-Korean ties and resuming denuclearization talks.

South Korea has tentatively decided to conduct its annual summertime drill with fewer participants than in springtime drills with the United States held from March 8 to 18, taking into consideration the coronavirus situation, according to military and government sources. This is said to be in accordance with quarantine precautions, amid the spread of the Delta variant, and also in coordination with Washington.

However, scheduled training scenarios are not expected to be adjusted.

The Combined Command Post Training (CCPT) will be conducted as previous scheduled from Aug. 16 to 26, said the military sources. A four-day crisis management staff training will start Tuesday as a prelude to the CCPT.

The verification of full operational capability (FOC), however, is not expected to take place this time around, a step needed for the transfer of wartime operational control (Opcon) from the United States to South Korea, the sources said.

In 2018, Korea and the United States agreed to kick off a three-step assessment of the Korean military needed to gauge Seoul's readiness to regain wartime Opcon. The first stage, concerning initial operational capability (IOC), was completed in 2019, while the second phase, the FOC, which evaluates command ability necessary for the Opcon transfer, has faced delays amid the pandemic. The full mission capability (FMC) would be the final step.

Seoul and Washington are expected to notify Pyongyang of the joint drill schedule on the day it is formally announced, according to custom, through the hotline between the United Nations Command and North Korea.

Pyongyang has protested such joint drills in the past, viewing them as rehearsals for an invasion of the North.

Chinese Foreign Minister Wang Yi said at a virtual session of the Asean Regional Forum (ARF) Friday that the United States "should not take any actions that will intensify tensions" if it really wants to resume dialogue with North Korea, referring directly to the joint drill with the South.

The Chinese Foreign Ministry quoted Wang as saying that North Korea has refrained from nuclear and long-range missile tests for the past several years, so its "legitimate concerns should be addressed."

North Korea has maintained a self-imposed moratorium on nuclear tests and long-range missile launches since late 2017, which cranked up diplomacy with the United States beginning in 2018.

North-U.S. negotiations however have been at an impasse since 2019 as the two sides clashed over the scope of denuclearization needed for any lifting of sanctions on the North.

Wang added, "An effective way to resolve the current deadlock is to lift sanctions imposed on North Korea by the United Nations Security Council."

The Chinese envoy mentioned a "snapback" mechanism in UN resolutions that allows for conditional sanctions relief, which could be immediately reinstated should the North violates the provisions.

He further told the forum that China will "continue to support seeking parallel progress in denuclearization and the establishment of a peace mechanism" on the Korean Peninsula by "taking phased and synchronized actions" to reach a political settlement.

South Korean Foreign Minister Chung Eui-yong and U.S. Secretary of State Antony Blinken also took part in the ARF, a rare multilateral forum involving North Korea, which was marked by moments of tension between Washington and Beijing over issues such as the South China Sea.

Chung and Blinken in a separate phone call Friday committed to coordinated efforts "to make substantial progress in achieving complete denuclearization," said Seoul's Foreign Ministry, and had an in-depth discussion of ways to engage and cooperate with the North "in such areas as humanitarian cooperation."

North Korea has been suffering from food shortages due to drought and floods, a Covid-19 blockade and international sanctions.

Pyongyang's Foreign Ministry on Saturday shared Wang's statement opposing the Seoul-Washington joint drill on its English-language website, saying that the Chinese foreign minister "stressed that if the U.S. truly wants a restart of dialogue with the DPRK, it should refrain from taking any action that might fuel the aggravated tension." DPRK is the acronym for the North's official name, the Democratic People's Republic of Korea.

On July 27, Seoul and Pyongyang restored inter-Korean communication lines, which had been severed by Pyongyang since June 9, 2020. The revival of the hotlines run by Seoul's military and Unification Ministry, following letter exchanges between the two countries' leaders, raised hopes for the resumption of inter-Korean and North-U.S. dialogue.

However, Kim Yo-jong, who often serves as a mouthpiece for her older brother, North Korean leader Kim Jong-un, called for a halt to the summertime Seoul-Washington military exercise in a statement on Aug. 1, warning it could undermine inter-Korean relations. She called on Seoul to make a "bold decision" between "hope or despair."

A group of 74 liberal lawmakers from the ruling Democratic Party (DP) and other splinter parties issued a statement Thursday calling for the postponement of the joint exercise, calling it "an obstacle in bringing North Korea to the negotiation table, regardless of its scale."

"If you look at the history of the South Korea-U.S. combined exercises, any government in the past has prioritized the alliance, and this principle remains the same today," a senior Blue House high-ranking official told the JoongAng Ilbo Friday. "North Korea doesn't rank very high when taking into consideration the variables considered for holding such joint drills."