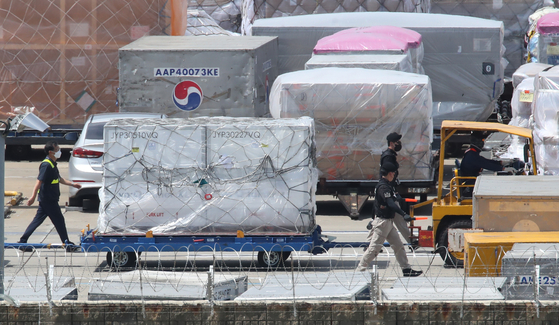 
Korea’s rate of fully vaccinated people is trailing all other nations in the Organization for Economic Cooperation and Development (OECD). 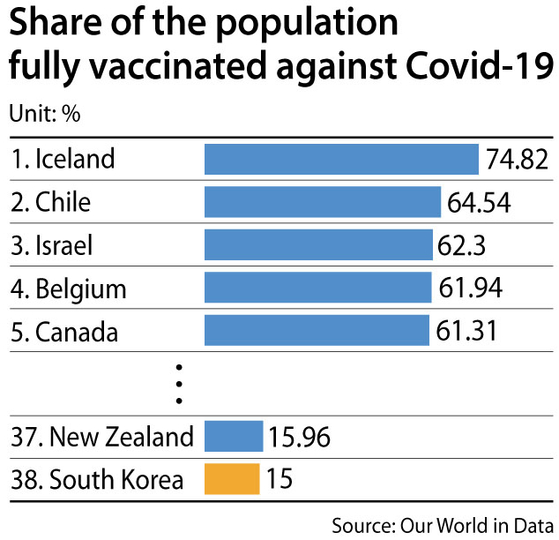 Since Korea launched its mass vaccination campaign on Feb. 26, only 15 percent of the country’s 52-million population, or around 7.71 million people, had been fully vaccinated as of Saturday midnight, according to the Korea Disease Control and Prevention Agency (KDCA).

This is last among 38 OECD member countries, according to Our World in Data, an online science publication connected to the University of Oxford.

Korea has administered at least one dose of a Covid-19 vaccine to more than 20.9 million people, or around 40.7 percent — which is still fifth-to-last among 38 OECD members.

In contrast to many other countries, the influence of anti-vaxxers in Korea is not particularly strong.

According to a Ministry of Health and Welfare survey on Covid-19 released last Tuesday, 84.1 percent of the respondents who hadn’t been vaccinated said they were willing to get a vaccine, up 6.8 percentage points from a month earlier.

When the nation’s online vaccine reservation system opened up to people in their 50s, it experienced overloads and crashes. Up to 10 million people were trying to use a system that could only accommodate 300,000 people.

Despite a strong desire to get vaccinated by the population, the supply shortages and delayed shipments have contributed to hiccups in the rollout.

In addition to a recent delay in a shipment of Moderna’s vaccines, the biotechnology company Novavax, which was expected to become a major vaccine distributor in the second half of the year, again delayed submission of its Covid-19 vaccine to the U.S. Food and Drug Administration (FDA) for emergency use authorization until its fourth quarter, according to Reuters.

The total amount of vaccines set to arrive in Korea is around 193 million doses, or for 100 million people, the Central Disaster and Safety Countermeasures Headquarters said. That is enough to fully vaccinate nearly double the country's population.

Of them, nearly 90 million doses are scheduled to arrive in the fourth quarter.

In the fourth quarter, inoculations are planned to expand to children and adolescents aged 12 to 17, and booster shots given to high-risk elderly people and essential personnel such as police and firefighters.

In addition, supplies coming in the fourth quarter mainly include AstraZeneca and Janssen, which cannot be given to people under 50, as well as Novavax, which hasn’t been approved in any country.

Unlike Korea, other countries are already procured vaccine supplies for next year and even beyond against the rise of the highly contagious Delta variant, which is also prompting a need for booster shots. It was reported that Israel, Switzerland and Taiwan inked deals with Moderna for purchase in 2023.

The Korean government is also negotiating additional contracts with Pfizer and Moderna to buy 50 million doses in total.

Lee Ki-il, a senior official at the Ministry of Health and Welfare, said in a press briefing last Wednesday that the government is in the final stage of negotiations with mRNA-based vaccine developers for next year’s supplies.

The government reiterated that the remaining amount of vaccines and next year’s supplies won't cause setbacks to the vaccination timetable, including doses needed for booster shots.

The country is also counting on its own Covid-19 vaccines.

Last week, President Moon Jae-in declared an ambition for Korea to become the world’s fifth largest vaccine-producing nation by 2025 and to develop its own Covid-19 vaccine.

The President also promised to support development of mRNA vaccines.

Starting Monday, reservations will open to the general public between 18 to 49.

A 10-day rotation system based on birth dates will be used for reservations for people between the ages of 18 and 49. People can make reservations only on days when the last number of the date matches the last digit of their birth date.

For instance, on the first day of bookings, Aug. 9, people born on the 9th, 19th or 29th day of a month will be eligible to book a vaccine.

Reservations can be made each day from 8 p.m. until 6 p.m. the next day.

Proxy booking, or reservations made on behalf of someone else, will be banned and only bookings made by an applicant will be allowed. 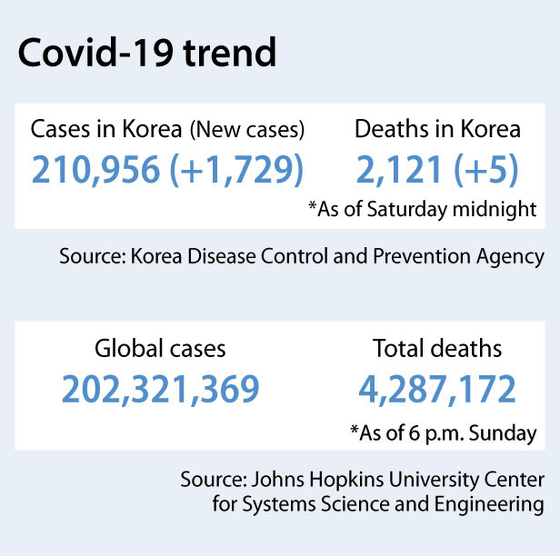 Meanwhile, on Sunday, Korea recorded its highest daily count for Covid-19 cases on a Sunday with 1,729 new patients, bringing its total caseload to 210,956.

There were five more virus deaths, raising the death toll to 2,121.

With Covid-19 cases showing no signs of slowing, the government decided to keep current social distancing measures, including the toughest restrictions imposed in the capital region, until Aug. 22.

In addition, the southeastern port city of Busan announced Sunday it will raise its social distancing to the highest Level 4 from Tuesday amid a surge in cases.

The total number of daily infections in non-capital regions surpassed 700 for the first time on Sunday, including 145 coming from the port city.