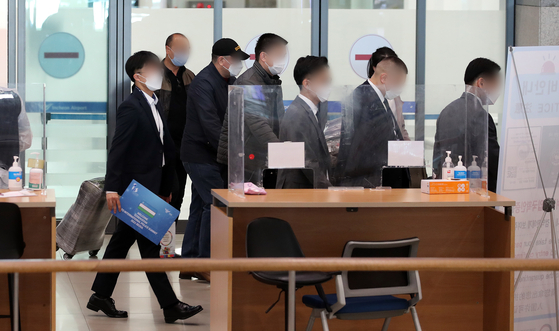 A group of travelers are leaving Incheon International Airport upon their arrival in Korea on Wednesday as Korea now acknowledges vaccinations received in a foreign country. Those who receive vaccinations abroad are now eligible to receive the same incentives as those who are domestically vaccinated. [NEWS1]


Korea hopes to achieve a 70-percent vaccination rate by the end of the month, bringing the country one step closer to a return to normal.

Jeong Eun-kyeong, head of the Korea Disease Control and Prevention Agency (KDCA), told the National Assembly Wednesday that the KDCA expects the nation’s vaccination rate to exceed 70 percent between Saturday and Monday.
She would not commit to a specific date for a start to the “With Corona” scheme, the Korean take on “Living with Covid-19.”

“The KDCA is currently in the process of drawing up a roadmap that will safely transition the nation to a return to normal while living ‘With Corona’,” Jeong said.

During an earlier parliamentary session this month, Jeong said that the nation will be able to adopt the “With Corona” scheme two weeks after achieving a 70-percent national vaccination rate.

As of Tuesday midnight, 66.7 percent of the population was fully vaccinated and 78.9 percent of people in Korea had received their first shot.

The vaccination rate has been gaining significant momentum over the past four months as the number stood at around 10 percent in early July.

Starting Tuesday, people who have been vaccinated in a foreign country will be held to the same social distancing guidelines and offered the same incentives as those vaccinated domestically, according to health officials.

Incentives include quarantine exemptions for the vaccinated when they come into close contact with those infected with Covid-19 as well as eased social distancing rules that allow up to eight people in the greater Seoul area to meet if four are fully vaccinated.

Exemptions were only granted under limited circumstances, such as for public service or emergency business purposes.

Those vaccinated abroad will still have to quarantine for two weeks upon arrival in the country.

A total of 1,571 cases were reported Tuesday, compared to 1,073 on Monday. The rise in case numbers comes after six days of the total trending downward.

Health authorities said that the sudden rise is due an increase in the number of coronavirus tests following the weekend and holidays.

A total of nine deaths were added to the death toll on Tuesday as well, bringing the total to 2,698.

The number of daily cases has remained below 2,000 for 12 consecutive days as the majority of people in Korea are now vaccinated.