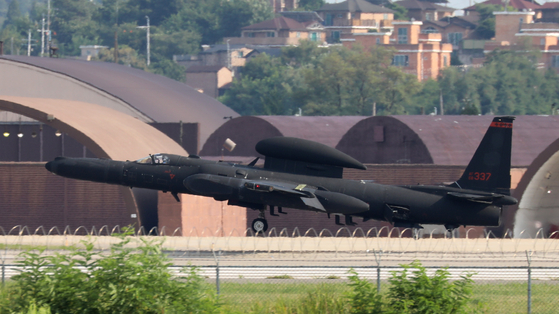 A Lockheed Martin U-2S high-altitude reconnaissance aircraft lands at Osan Air Base in Pyeongtaek, Gyeonggi, after completing a mission Tuesday afternoon. Seoul and Washington kicked off their four-day crisis management staff training Tuesday as a prelude to their annual summertime military exercise next week, and Kim Yo-jong, the North Korean leader’s sister, issued a statement the same day slamming the joint drill. [NEWS1]


Kim Yo-jong, the North Korean leader's sister, lambasted Seoul and Washington Tuesday for their annual summertime joint military exercise and demanded the withdrawal of U.S. troops from the Korean Peninsula.

Through an English-language statement in the North's official Korean Central News Agency (KCNA), Kim expressed her "deep regret at the perfidious behavior of the south Korean authorities," warning that "a dear price should be paid."

South Korea and the United States kicked off Tuesday a four-day crisis management staff training as a prelude to their main annual summertime joint exercise scheduled from Aug. 16 to 26.

Kim, a vice department director of the North's ruling Workers' Party's Central Committee, said Seoul and Washington's preliminary training and next week's main combined command exercise "are the most vivid expression of the U.S. hostile policy towards the DPRK," using the acronym for the North's full name, the Democratic People's Republic of Korea.

She went onto demand the United States withdraw its troops and military assets from South Korea.

"For peace to settle on the peninsula, it is imperative for the U.S. to withdraw its aggression troops and war hardware deployed in South Korea," said Kim. "As long as the U.S. forces stay in south Korea, the root cause for the periodic aggravation of the situation on the Korean peninsula will never vanish." 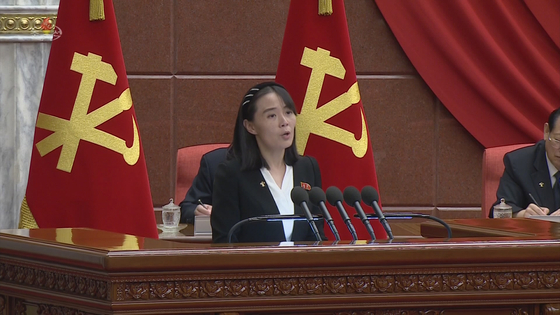 Kim accused the United States of being a "chief architect destroying peace and stability in the region" for pushing forward with the joint drill "at such a sensitive time as now when the international eyes are focused on the development of the situation on the peninsula."

She said that this "proves that 'diplomatic engagement' and 'dialogue with no strings attached' touted by the present U.S. administration is hypocrisy to cover up its aggressive nature."

The Joe Biden administration said it will take a "practical and calibrated" approach to Pyongyang and has offered dialogue without condition multiple times. It has also adhered to strict sanctions and demands for the North to improve its human rights situation.

Kim claimed that the U.S. and South Korean armies "desperately" started the joint military exercise, "further accelerating the unstable situation despite the unanimous denunciation and rejection at home and abroad."

Pyongyang has regularly protested Seoul and Washington's annual springtime and summertime military drills, which it views as rehearsals for invasion of the North.

Some South Korean government officials and lawmakers have called for a postponement of the current drill, taking into consideration inter-Korean relations, which showed some indications of thawing with the recent revival of cross-border communications lines.

Chinese Foreign Minister Wang Yi also openly opposed the Seoul-Washington exercise at the Asean Regional Forum (ARF) last Friday, saying that the United States "should not take any actions that will intensify tensions" if it wants to resume dialogue with the North.

However, South Korea's military said the computer-simulated joint summertime exercise will be conducted as scheduled, though with a reduction of participating personnel due to the Covid-19 situation.

In her statement, Kim said, "Whatever the scale and mode, the joint military exercises are of aggressive nature as they are a war rehearsal."

North Korea "will counter the U.S. on the principle of power for power and goodwill for goodwill," said Kim. She added that Pyongyang plans to increase its national defense capabilities and abilities to conduct a "powerful preemptive strike."

The press statement was released "upon authorization," which indicates that North Korean leader Kim Jong-un was behind its release.

Kim's statement was also broadcast on state television Tuesday afternoon, which means it could be seen domestically.

In contrast, her Aug. 1 statement released by the on KCNA, aimed at an external audience, was not carried in the North's official Rodong Sinmun nor aired on its state-run Korean Central Television.

Kim in her statement on Aug. 1 demanded a suspension to the Seoul-Washington military exercise, which she said could undermine inter-Korean relations, calling on the South to choose between "hope and despair."

Previous North Korean leaders Kim Il Sung and Kim Jong-il, while they did not officially agree to the presence of U.S. troops in South Korea, indicated they understood the need for them during negotiations with Washington and Seoul.

At the first high-level meeting between Kim Yong-sun, a secretary for international affairs of North Korea's Workers' Party, and Arnold Kanter, U.S. under secretary of state for political affairs under President Bill Clinton, in New York in January 1992, the North proposed the withdrawal of the U.S. Forces Korea should Pyongyang and Washington establish diplomatic ties, which was refused by the United States.

This was later confirmed through accounts of the first inter-Korean summit on June 15, 2000 between President Kim Dae-jung and North Korean leader Kim Jong-il, which describe that the North had tacitly agreed to recognize the necessity of U.S. forces in South Korea on the condition of the establishment of diplomatic ties with the United States during the 1992 talks.

Thae Yong-ho, a lawmaker from the main opposition People Power Party and a former North Korea diplomat who defected in 2016, said in a statement Tuesday that leader Kim Jong-un is "trying to get the United States to withdraw from the Korean Peninsula by threatening to press the nuclear button first."

He added, "North Korea, through more intense pressure, will continue in the future to try to weaken the [South-U.S.] alliance and increase mistrust due to differing views on the joint military exercises, and induce clashes within the U.S. political circle over the possibility of sacrificing U.S. forces in Korea rather than its own people in the U.S. mainland."

Thae pointed out that the recent withdrawal of U.S. troops from Iraq and Afghanistan "may have given encouragement to the Kim siblings."

Responding to Kim Yo-jong's latest bellicose statement, a South Korean Unification Ministry official told reporters Tuesday, "Tensions should never be heightened on the Korean Peninsula under any circumstances," adding that Seoul will be "prepared for all possibilities."

The official continued, "I hope that the will to establish peace on the Korean Peninsula and develop inter-Korean relations, which was confirmed during the recent exchanges of personal letters between the two leaders, will be respected."

Inter-Korean communication lines were restored on July 27 after Pyongyang unilaterally severed them 18 months ago, following a series of letter exchanges between President Moon Jae-in and the North Korean leader since April.

However, the ministry said later that the North Korean side did not respond to another afternoon call and that it will be monitoring the situation.

Ahead of the Seoul-Washington training, John Kirby, the Pentagon spokesman, said in a briefing Monday, "Nothing's changed about our need for readiness on the Korean Peninsula and our desire to work in lockstep with our ROK [Republic of Korea] allies on a training regimen that improves that readiness and keeps that readiness strong."

Drills are not a political tool