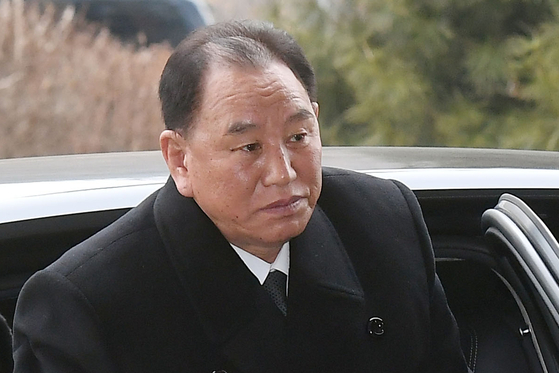 Kim Yong-chol, a department director of the Central Committee of the North’s ruling Workers' Party, is pictured in a file photo. In a statement Wednesday, Kim, in charge of handling inter-Korean affairs, warned of a “serious security crisis” in protest of Seoul and Washington’s joint military exercise. [YONHAP]


North Korea again slammed South Korea and the United States Wednesday for going ahead with their summertime joint military exercise, warning of a "serious security crisis" to follow.

Kim Yong-chol, director of the North's United Front Department, which is in charge of inter-Korean affairs, said through state media that Seoul turned down the "opportunity" for peace and stability on the Korean Peninsula by choosing to conduct its annual military exercise with the Washington.

In an English-language statement carried by the North's official Korean Central News Agency (KCNA), Kim continued, "We will make them realize by the minute what a dangerous choice they made and what a serious security crisis they will face because of their wrong choice."

On Tuesday, South Korea and the United States kicked off a four-day crisis management staff training (CMST) as a prelude to their main annual summertime joint exercise scheduled from Aug. 16 to 26. Fewer personnel will be taking part in the exercise compared to the springtime drill held in March because of the Covid-19 situation.

Kim said that South Korea "opted for alliance with outsiders, not harmony with compatriots, escalation of tension, not détente, and confrontation, not improved relations."

He continued, "They must be made to clearly understand how dearly they have to pay for answering our good faith with hostile acts after letting go the opportunity for improved inter-Korean relations."

His statement, the latest in a series of incrementally more bellicose remarks made by Pyongyang, appeared to hint at a future military provocation.

"Now that they made their clear option known to the whole world, defying the opportunity, we will have to make clearer corresponding decision," said Kim. "We will keep going on with what we should do."

In her statement on Aug. 1, Kim demanded a suspension to the Seoul-Washington military exercise, which she said could undermine inter-Korean relations, calling on the South to choose between "hope and despair."

In her statement Tuesday, coinciding with the start of the preliminary training between Seoul and Washington, Kim expressed her "deep regret" that South Korea was going ahead with the military drills and warned that "a dear price should be paid."

She also accused Washington of "destroying peace and stability in the region" and called on the United States "to withdraw its aggression troops and war hardware deployed in South Korea."

However, North Korea may not want to cross a red line that could result in more sanctions from the international community and rule out the possibility of talks with the United States, especially as it faces food shortages and economic difficulties heightened by the Covid-19 pandemic.

North Korea has maintained a self-imposed moratorium on nuclear tests and long-range missile launches since late 2017, which allowed diplomacy with the United States beginning in 2018.

Pyongyang has since periodically tested short-range ballistic missiles, which are in violation of UN Security Council resolutions but have been generally overlooked by the United Nations and the United States.

The two Koreas jointly announced their communication lines were restored on July 27 after Pyongyang unilaterally severed them 18 months ago. The Blue House said the decision was reached following exchanges of letters between President Moon Jae-in and North Korean leader Kim Jong-un since April, leading to some speculation of an opportunity to thaw inter-Korean relations. North Korea did not report the restored inter-Korean communication lines domestically.

The two sides resumed daily phone calls through their military and joint liaison office hotlines in the morning and afternoon.

However, on Wednesday, Seoul officials said North Korea did not answer South Korea's phone calls for a second day.

The two sides last communicated Tuesday morning but the North did not respond to the afternoon calls, just two weeks since the restoration of the hotlines.

Responding to Kim Yong-chol's statement Wednesday, the Unification Ministry repeated the South Korean government position that the joint military drills "are of a defensive nature and has no hostile intention."

A Unification Ministry official told reporters that the joint drill "fully takes into consideration this stance, the Covid-19 situation, military aspects such as the transfer of wartime operation control (Opcon), and conditions to progress the peace process on the Korean Peninsula."

The official urged related parties to return to dialogue "as soon as possible."