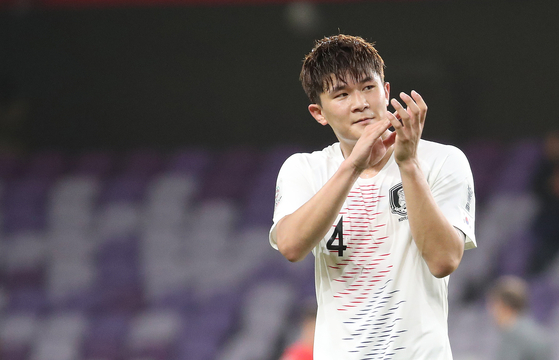 
Korean defender Kim Min-jae has arrived in Istanbul as negotiations near a close with Turkish football team Fenerbahce, ending months of speculation on where the formidable center back will play next season.

The Turkish club tweeted on Saturday that Kim, currently under contract with Beijing Guoan, would arrive in Istanbul on Sunday to undergo medical checks and finish negotiations. Kim's arrival in Istanbul was confirmed by Turkish reporter Ahmet Selim Kul, who shared images of Kim at the airport on Twitter.

Over the last few months, Kim has been linked to a number of top European clubs including Portuguese side Porto, Italian Serie A club Juventus and the Premier League's Tottenham Hotspur. On multiple occasions, reports have gone as far as to say that a deal has been struck, but this is the first time that Kim has actually traveled to a club to undergo medical checks.

Kim's absence at the 2020 Tokyo Olympics — he was named as one of the wildcard picks but Beijing declined to release him for the Games — left a devastating hole in Korea's defense and was likely a key reason the team fared so badly.

According to multiple unconfirmed reports in Korea, Kim is set to take a sizeable pay cut to join the Turkish side, apparently opting to earn less money in an effort to gain a foothold in Europe.

Fenerbahce is one of the most popular football clubs in Turkey and the most successful team ever in the country's Turkish Super League. The club's Portuguese manager Vítor Pereira joined the team this year after three years managing Shanghai SIPG in the Chinese Super League. In that position, Pereira has experience of playing against Kim and is likely very familiar with the defender's skills.


If Kim's move is successful he will join a very short list of Korean players to appear in the top Turkish league. Lee Eul-yong and Suk Hyun-jun both previously played for Trabzonspor, Lee on two occasions between 2002 and 2006 and Suk in the 2016-17 season, and Shin Young-rok played for Bursaspor in 2009.