Former military base may be used to build government housing

Former military base may be used to build government housing 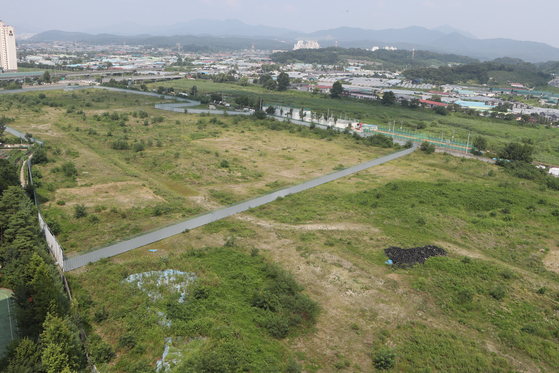 An empty space that used to be a military base in Namyangju, Gyeonggi on Wednesday. The government said it will be looking into a housing plan with 3,200 units. [YONHAP]

A former military base in Namyangju, Gyeonggi, may be used by the government for the building of 3,200 housing units.

Finance Minister Hong Nam-ki said during a government real estate meeting held Wednesday that the plan is being examined in order to help stabilize the property market.

He said that the development process will be accelerated and local approvals will be facilitated to support the project.

The Finance Minister said the government will announce late this month the replacements for the Taereung Country Club and the government complex in Gwacheon, government properties that were supposed to be developed into housing.

The plans were scrapped after local resistance. Some residents demanded that the land be used to develop parks or other public facilities that would benefit the community.


They were also concerned that the building of so much public housing would drive down the value of their properties.

Hong also said the government will raise the number of applicants for new government apartments this year from 30,000 to 32,000.

Under the program, home seekers without an apartment will be eligible to apply for the purchasing rights for government supplied apartments a year or two before construction begins.

They will be selected based on the number of family members, income, the length of time in which they have been living in rentals without owning any property and how long that they have been saving up for the housing deposit.

The purpose of the program is to reduce the number of people waiting for the availability of such apartments and to help lower property prices.

Until last week, Hong blamed the market for problems in housing.

Hong said that the housing bubble could pop and those that bought apartments while taking out loans could be in a difficult situation once interest rates rise.

He was criticized for shifting the blame away from the government.