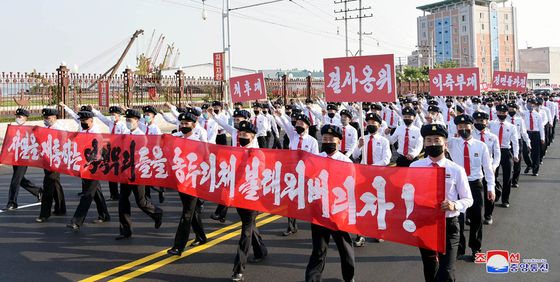 
North Korea severed all communication with South Korea at noon Tuesday after its state media reported Pyongyang would henceforth regard Seoul as an “enemy.”


According to the Korean Central News Agency (KCNA), the North cut off and shut down all direct communication lines to the South, which means the link through the inter-Korean liaison office in Kaesong, ‎North Hwanghae Province, the East and West Sea lines between the two countries’ militaries, and the hotline between South Korea’s presidential office and the central committee of the North’s Workers’ Party.

Slamming the South Korean government for “treacherous and cunning behavior” in turning a blind eye to “disgusting riff-raff,” KCNA said in an English-language dispatch that the regime reached the conclusion that “there is no need to sit face to face with the south Korean authorities and there is no issue to discuss with them, as they have only aroused our dismay.” 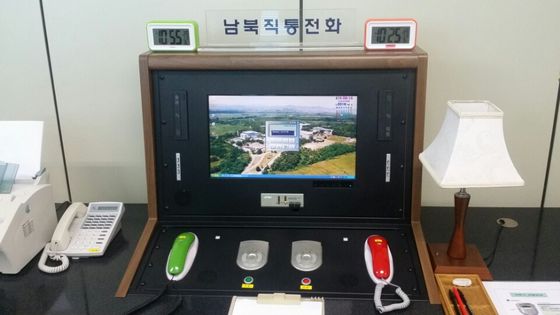 An inter-Korean hotline installed at the Joint Security Area at the truce village of Panmunjom. North Korea announced Tuesday it would cut off all such communications. [YONHAP]

“This measure is the first step of the determination to completely shut down all contact means with south Korea and get rid of unnecessary things,” the report added.

Seoul’s Ministry of Unification on Tuesday afternoon confirmed all phone lines with the North were inactive and that it could no longer reach Pyongyang through the two countries’ fixed communication channels.

The bombshell move comes less than a week after Kim Yo-jong released a statement last Thursday condemning the South Korean government for failing to stop North Korean defectors from floating balloons containing propaganda leaflets across the border into the North.

Pyongyang’s United Front Department, one of its leading bodies in charge of South Korean affairs, said in a statement Friday the regime had “definitely” decided to withdraw from the inter-Korean liaison office in its border town of Kaesong, but no mention was made of the other direct communication lines.

Government officials in South Korea were taken aback by the North’s escalation, which threatens to return inter-Korean relations to the precarious state they were in before the first inter-Korean summit in Panmunjom in April 2018 and undo much of the agreement reached between South Korean President Moon Jae-in and Kim Jong-un during that meeting.

“The communication lines between the South and North are a fundamental means of contact and must be maintained as per the inter-Korean agreement,” a Unification Ministry official told reporters Tuesday.

“The [South Korean] government will continue to strive to maintain peace and prosperity on the Korean Peninsula while respecting inter-Korean agreements,” he continued.

Particularly alarming for Seoul is the North’s announcement that it would deal with the South as an enemy, suggesting the regime could further heighten tensions through military provocations towards South Korea.


Kim Yo-jong in her statement listed the closure of the liaison office, bulldozing of South Korean properties in the Kaesong Industrial Complex and Mount Kumgang, and the scrapping of the Sept. 19, 2018 inter-Korean military agreement as the possible next steps the regime could take.


Through the military deal, which was signed as part of Moon and Kim’s third summit in Pyongyang in September 2018, the two sides agreed to ban all acts of hostility in the demilitarized zone. 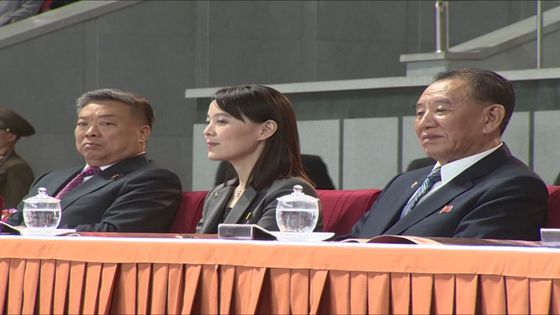 First Vice Department Director Kim Yo-jong, center, and Kim Yong-chol, vice chairman of the Central Committee of the Workers' Party, right, watch a mass game in Pyongyang in June 2019. According to state media, the two figures were responsible for instructions laid out Tuesday ordering that all communications with South Korea be severed. [YONHAP]


The goodwill that followed those inter-Korean meetings proved short-lived, however, after North Korea’s denuclearization negotiations with the United States collapsed after the failure of Kim’s second summit with U.S. President Donald Trump in February 2019.

Since then, Pyongyang turned up the dial in its antagonism toward the South, regularly accusing Seoul of engaging in hostile actions through joint military exercises with the United States and the purchase of strategic assets like F-35A jets, while failing to move forward with promises contained in the Panmunjom agreement.

With its economy reeling under sanctions and the coronavirus pandemic, North Korea responded with inordinate anger after a group of activists in South Korea — many of them defectors from the North — dispatched balloons carrying propaganda across the border in late April and late May.

Some of the leaflets sent in April announced that two defectors, including former diplomat Thae Yong-ho, were elected lawmakers in South Korea's April 15 general elections.

In Pyongyang, the regime held state-sponsored demonstrations decrying the leaflet scatterings by defectors, which were called “perfidious acts of the confrontational maniacs of inciting escalated tension” in a KCNA commentary on Monday.

The South Korean government and ruling Democratic Party responded to Kim Yo-jong’s statement on Thursday by announcing they were preparing to pass a bill banning the dispatch of leaflets northward, but the measure did little to placate Pyongyang.

Experts in Seoul say the insulting content of the leaflets with regards to Kim Jong-un and his family may have been regarded as an affront to the regime’s cult of personality around its leaders, but that the North’s disproportionately allergic response testifies to larger problems in the relationship between the two Koreas.

“[North Korea is acting out] not just because of the propaganda fliers, but rather because the leaflet issue emerged as an issue just as the regime was looking for a justification to express its dissatisfaction and distrust over South Korea that have accumulated over time,” said Kim Dong-yub, a professor of North Korean studies at Kyungnam University’s Institute of Far Eastern Studies in South Korea.

“The [severing of communications] is aimed at shoring up internal support, and carries a message that North Korea will push on [with its economic breakthrough strategy] without compromising or submitting to external pressure.”

As to Pyongyang’s next steps, South Korean officials and analysts expressed concern about the possibility that the regime could undertake military acts of aggression, in line with threats in a statement Friday vowing to turn Seoul’s “nightmare into reality” through an “evil cycle of confrontation” it was determined to pursue.