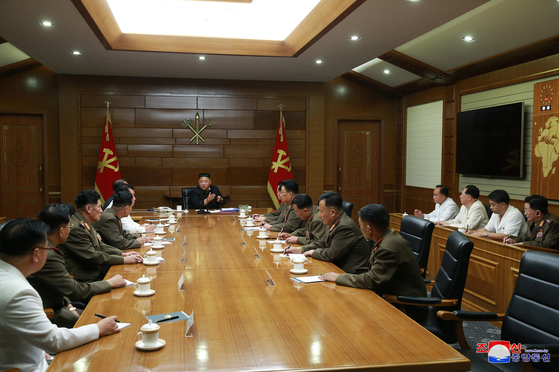 CMC Vice Chairman Ri Pyong-chol, an increasingly powerful figure in the regime’s military believed to be a relative of Kim’s wife, notably took part in the meeting, along with leading officials of the General Political Bureau, General Staff and Ministry of the People’s Armed Forces, the report said.

After deliberating over issues including ideological education of military officials — including “the need to thoroughly arm the young commanding officers” — the CMC followed up with a closed meeting on the military situation on the Korean Peninsula, “potential military threats” and a discussion on “further bolstering a war deterrent.”

It was unclear what the "war deterrent" referred to, though no mention of a nuclear capacity was reported by KCNA.

The meeting served as an ostensible follow up to a preliminary CMC meeting on June 23, when Kim ordered an abrupt suspension of all military provocation plans arranged by the General Staff on orders from his sister, Kim Yo-jong.

The younger Kim was behind the decision to demolish the inter-Korean liaison office at Kaesong last month, the biggest escalation the North has yet taken toward South Korea since they entered into official diplomatic contact in early 2018.

Pyongyang also followed up its destruction of the office with taking steps to restore propaganda loudspeakers on the border and preparing to launch millions of leaflets toward the South, but Kim Jong-un slammed the breaks on those activities during the preliminary meeting in June.

KCNA made no mention of plans for further provocations toward Seoul discussed in Saturday’s meeting, and the language used in its report was more subdued than the tone describing the CMC's last expanded meeting in May, which mentioned the need to upgrade the regime’s “nuclear war deterrence.”

Kim, however, “signed the orders for carrying out key tasks that had been discussed and decided,” the Sunday's report read, with no further elaboration.

The meeting was the first time in 11 days the dictator’s public activities were reported, since his visit to the mausoleum of his father and grandfather to pay tribute to the latter, regime founder Kim Il Sung, on the 26th anniversary of his death.

The focus on indoctrination at the meeting that preceded discussions of larger strategic concerns suggests the regime may be facing increasing difficulties with the upkeep of its military amid continuing international sanctions and the crunch brought on by the coronavirus pandemic, according to experts in South Korea.

Nonetheless, the talks about dealing with a “potential military threat” show the regime is preparing a response to South Korea and the United States’ scheduled summertime combined military exercises, according to Hong Min, an analyst at Seoul's Korea Institute for National Unification.

“[The North] may be using the Central Military Commission meeting as a message to pressure South Korea and the United States to stop their joint exercises,” Hong said. “First Vice Department Director Kim Yo-jong’s recent statement also urged Washington to hold off on threatening language and stop meddling [in the North’s affairs].”