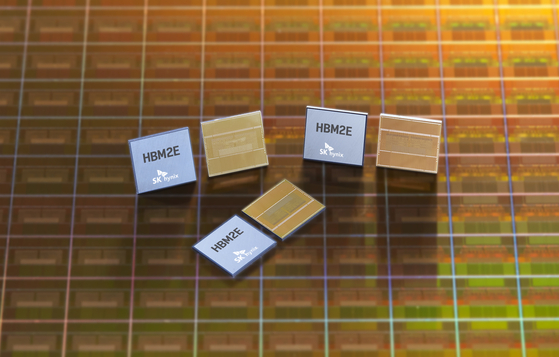 
Samsung Electronics, the world’s largest DRAM maker, lost more than 5 percent this week and 1.91 percent on Thursday alone to 77,000 won ($66). SK hynix fell 15 percent during the week and 4.74 percent Thursday.

The former is the more diversified of the two, as it makes a wider range of chips, including processors and sensors.

Boise, Idaho-based, Nasdaq-listed Micron, also a memory-chip maker, is down about 8 percent this week.


Analysts have been warning that high memory-chip inventories as a result of stockpiling will translate into lower demand starting in the final quarter of the year and into next year.


A slowdown in the manufacturing of cars and electronic devices, a consequence of the global shortage of processor chips, could also contribute to a glut of DRAMs, which have not been in short supply.


“If a disruption in the manufacturing of electronic devices, triggered by a shortage of non-memory chips, continues, that could lead to eased demand for memory chips,” said Lee Jae-yun, an analyst at Yuanta Securities.


“Against this backdrop, memory chip buyers have turned more conservative in their purchases, which drives up uncertainties for the chip prices in the fourth quarter,” he said.


Taiwan’s TrendForce forecasts that demand for different types of DRAMs will soften in the fourth quarter after their peak in the second quarter.


“As the demand related to servers, PCs and other major applications slows, the whole DRAM market will gradually shift to the state of oversupply,” it said in a report released on Wednesday.


“This, in turn, will inevitably create a lot of uncertainties with respect to the price trend in the fourth quarter of 2021,” it concluded in the report.


TrendForce projects a 0 to 5 percent quarterly decline in PC DRAM contract prices in the fourth quarter.


This trend could dampen expectations for the profitability of the Korean chipmakers following a strong second quarter.

Kim Kyung-min, an analyst at Hana Financial Investment, revised down her projection for SK hynix’s operating profit for 2022 from 14.4 trillion won to 10.8 trillion won, assuming average DRAM prices will go down by 5 percent in the fourth quarter and another 10 percent in the first quarter of 2022.