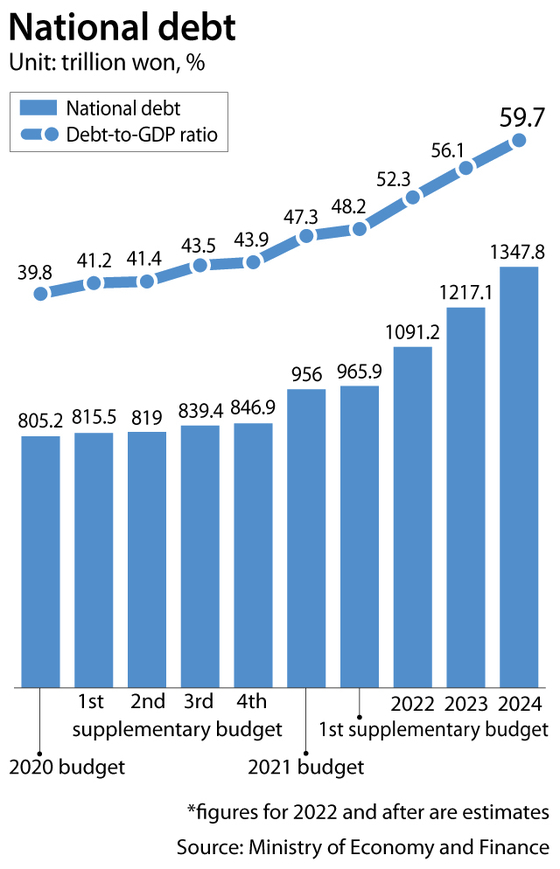 National debt per capita surpassed the 18-million-won ($15,000) mark, and the number is only expected to rise due to pandemic economic stimulus packages.

According to the National Assembly Budget Office on Aug. 13, national debt per capita rose 16.9 percent on year to 18 million won.

The per capita figure is calculated by dividing the total national debt, 930.6 trillion won, by Korea's total registered population of 51.7 million people. The figure identifies how leveraged the government is and evaluates the default risk of government bonds.

With President Moon Jae-in’s social welfare policies and multiple supplementary budgets for the pandemic, the speed in which the national debt and per capita figure are rising has been accelerating.

Debt per capita was 12.1 million won before the Moon Jae-in administration, and grew 5.9 million won since he took office, rising at an average of 1.3 million won per year — almost twice that of the average yearly increase of 620,000 won between 2000 and 2016.

Some show concerns that the real debt may be even larger than the estimate.

President Moon Jae-in announced on July 29 that “the government will actively utilize government finances to serve as a support system for the citizens,” ahead of planning next year’s budget.

The national budget next year is expected to be a record high, also adding to the debt. Insiders say the Ministry of Economy and Finance will try to stick close to the total budget proposal of 593.2 trillion won, but could exceed 600 trillion won after negotiations at the National Assembly.

Debt-to-GDP ratio possibly passing the 50 percent mark for the first time has also been alarming to many.

“Increasing national debt while the birth rate is decreasing and we’re becoming an aging society will heavily weigh on the next generation,” said Kim In-june, an emeritus professor of economics at Seoul National University. “Even when we want to implement certain policies, we’re going to have less financial autonomy.”

Lee further emphasized that this is a time that Korea should be focusing on improving its fiscal health rather than improving the economic outlook.