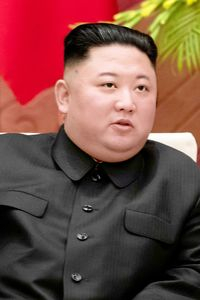 In a message to Putin on Aug. 15 — the date of Japan’s capitulation to the Allies at the end of the Second World War — Kim wrote that friendly ties between Russia and North Korea, which he described as “forged in blood in the struggle against the common enemy,” have been carried on by the two countries, according to the North’s Korean Central News Agency (KCNA).

The Soviet Union, which preceded the current Russian Federation, declared war on Japan in the waning days of the war and invaded Manchuria and took control of the northern half of the Korean Peninsula. 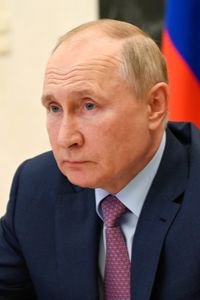 
Kim added that he hoped that North Korean-Russian relations would strengthen and rise to a “new strategic level.”

Putin also sent a message to Kim on Sunday. In his message, Putin wrote that the two countries “cherish the memory of the service members of the Soviet Red Army and Korean patriots who dedicated their lives to the freedom of Korea,” the KCNA said.

Putin further expressed his belief that “bilateral cooperation and mutual benefit will be further promoted through the implementation of the agreements reached at the 2019 meeting in Vladivostok,” referring to the summit the two countries’ leaders held in the port city in Russia’s Far East.

Kim made his first official visit to Russia in April 2019, when he met Putin in Vladivostok on the latter’s way to Beijing.

Although the summit was friendly, it appears to have produced “little substance,” according to Artyom Lukin, an analyst writing for the think-tank 38 North.

“This would no doubt contribute to ensuring the security in the Korean Peninsula and the Northeast Asian region as a whole,” Putin said in the letter regarding the Vladivostok agreements, according to the KCNA.

North Korea has sought to boost its foreign relations with other countries, especially those with socialist parties in power such as China and Cuba, as denuclearization talks with the United States have stalled.

Strict global sanctions, compounded by the North’s self-imposed border lockdown in response to the Covid-19 pandemic, have battered the North’s economy, which is highly reliant on raw materials and labor exports and on finished consumer and industrial imports from other countries.

Although Moscow provided Pyongyang with massive economic and military aid during the Cold War, that support evaporated when the Soviet Union established diplomatic relations with Seoul in 1991.

While Russia has become more adversarial toward the United States since Putin came to office, the hostility between the two superpowers has not translated into substantial Russian support for North Korea.

A realistic way to address the nuclear crisis

North may restore rail commerce with Russia to boost trade