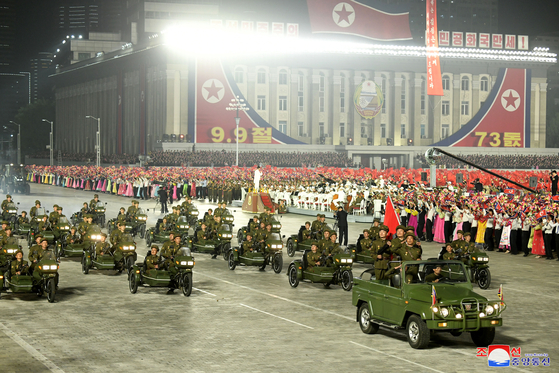 Public security personnel participate in an overnight parade in Kim Il Sung Square in Pyongyang on Thursday during the regime's celebration of the 73rd anniversary of its founding. [YONHAP]


While South Korean intelligence expected North Korea to show off its latest weaponry at a parade to celebrate the 73rd anniversary of the country's founding, Pyongyang put on a much less ominous display on Thursday: of tractors and motorcycles.

The pre-dawn festivities in Kim Il Sung Square in Pyongyang on Thursday – the North’s third such nighttime parade within the past year – featured personnel in orange hazmat suits and some conventional weapons, including multiple rocket launchers. The parade also featured tractors and public security personnel on motorcycles, in addition to the usual goose-stepping soldiers.

The parade represented a significant anti-climax considering the expectations of South Korean intelligence sources, who earlier this week told the JoongAng Ilbo they anticipated the regime to show off new submarine-launched ballistic missiles (SLBMs) and other advanced weapons.

The North’s state-controlled Korean Central News Agency (KCNA) said jets flew above the parade, but has not yet broadcast video footage of the parade. Previous overnight parades were not broadcast live, and recorded footage was later shown to the public on state television.

Ballistic missiles were seen in neither photos of the parade nor mentioned in KCNA’s reports.

Although North Korean leader Kim Jong-un oversaw the parade from a balcony overlooking the square, he did not deliver a speech – a change from last October’s parade celebrating the 75th anniversary of the founding of the Workers’ Party. On that occasion, Kim boasted of his regime’s nuclear prowess and showed off new intercontinental ballistic missiles.

A photo of Kim from the official Workers’ Party newspaper Rodong Sinmun showed him wearing a grey-beige suit, waving towards assembled spectators and parade participants in the square below, which is named after his grandfather, North Korea's founding leader.

Some analysts said the timing of Thursday’s celebration and the fact that participants comprised fewer members of the armed forces and more civilian personnel suggested the parade was geared towards a domestic audience.

“This parade comes about eight months since the one held in January,” said Cha Du-hyeogn, a senior researcher at the Asan Policy Institute. "Hosting such celebratory parades so frequently can be interpreted as a sign that the North’s domestic situation is bad enough that the regime needs to bolster its internal unity.

"At the same time, the parade centered on non-military personnel, which seems to be aimed at emphasizing a kind of psychological readiness that includes not only the usual armed forces, but also all people," he added.

The choice to intentionally host a celebration that de-emphasizes the military may also reflect the regime’s recognition that it cannot easily engage in dialogue with the U.S. nor try to intensify tensions.

There are also signs that the parade was the North’s response to joint U.S.-South Korea autumn training exercise.

The regime lambasted the joint drill, with Kim Yong-chol, head of the North’s Unified Front Department – the Workers’ Party agency in charge of propaganda directed at the South – warning the allies that the country would “make [them] feel a huge security crisis.”

However, the North has taken no perceptible measures in response to the joint exercise except to agree to the re-establishment of direct communication lines between the two Koreas, only to stop responding on them later.

“Since the International Atomic Energy Agency (IAEA) released a report saying that the North has restarted its Yongbyon nuclear complex, the North may feel it is unwise to showcase new weaponry, such as an ICBM or another means of delivering nuclear weapons, at a time when the U.S. administration of President Joe Biden is already watching its moves,” said Nam Sung-wook, chair of the department of North Korean studies at Korea University.

“Thursday’s parade, which took on a celebratory atmosphere, can be interpreted as a tone-downed message to the Biden administration," he said, "without giving the U.S. cause to apply additional, tougher sanctions.”