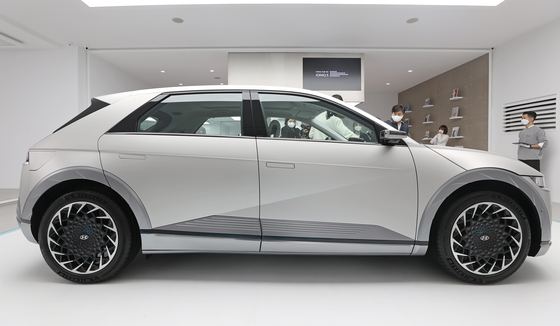 Hyundai Motor's Ioniq 5 is safer than Tesla’s Model 3, according to a government test.

The Ministry of Land, Infrastructure and Transport said Tuesday that a safety test conducted by the Korea Transportation Safety Authority compared the two models. The Ioniq 5 EV received a score of 92.1 points out of 100 compared to the Model 3's 83.3 points.

While in collision tests, Hyundai’s EV met safety standards, it lost points for safety of the driver and passengers in the back seat during a head-on collision.

The car’s high-voltage electrical system did not catch fire during the collision test and, after a crash, the doors still opened.

Tesla’s Model 3 did better on the collision safety test, earning 99.6 points, but scored lower on its testing on safety against collision with pedestrians (58.4) and accident prevention system (59.5).

The Model 3's high-voltage electrical system did not catch fire or explode and doors still opened after a crash.

The safety of the bumper received high scores. However, the hood was designed in a way that could cause a critical head injury during a collision.

The autonomous emergency braking system failed to detect and respond to bicycles at a crosswalk.

The vehicle's automatic warning system that is supposed to alert a driver when the vehicle drifts into another lane failed to go off in some conditions.

Hyundai's Ioniq 5 and Tesla’s Model 3 are the most popular EVs in Korea.

“As we are in a period in which transition towards future cars is happening quickly, we are trying to set a new evaluation paradigm that is more sophisticated,” said Kim Jung-hee, head of the ministry’s automobile policy department.

The ministry said it is testing nine internal combustion engine vehicles, and the results will be announced in October.