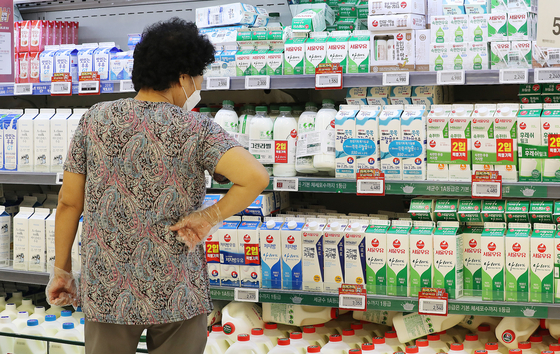 A customer looks at milk displayed at discount mart in Seoul on Wednesday. [NEWS1]


Milk prices are rising fast, and the government is working to keep them in check via a change in the raw milk pricing system, but dairy businesses are strongly opposed.

Instead of simply using a set formula to determine the increase, the authorities want to take into account other factors, such as the need for milk.

For example, if the production price per liter increases by 100 won (9 cents), the increase will be made within a range from 90 to 110 won. A 21-won increase to 947 won per liter was decided for this year on Wednesday.

"We've been talking with the dairy industry for the past year, but there hasn't been any progress, and the government decided to map out plans to improve the pricing system by end of year," said an official for the Ministry of Agriculture, Food and Rural Affairs.

Having a pricing system for raw milk was first discussed in Korea after dairy producers suffered from the foot-and-mouth disease breakout in 2010 and 2011, and it was first implemented in 2013.

Milk prices kept on rising due to inflation and high labor costs. Demand for milk has been has been falling due to the falling birth rate, and the government decided that the pricing system is out of touch with the market and a burden for consumers.

According to Statistics Korea, there are 11,681 tons of powdered milk in stock as of June, up 1.03 percent on year. Although the stock has been on a mild increase recently due to cows not doing well in the summer heat, it had a stock of 12,109 tons in February, a four-year-and-a-five-month high. Powdered milk is one of the factors that can show how much milk isn't being sold, as unsold raw milk is turned into powdered milk for storage purposes. 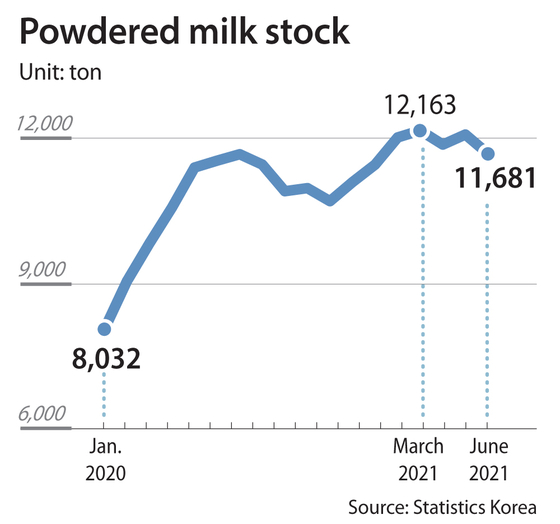 The government plans to change the pricing system to reflect market demand. Having a different price calculation system for raw milk used to make dairy products and drinking milk is another possible option.

Business could suffer from lower prices, and the ministry plans to provide support measures for companies producing processed dairy products such as cheese and butter.

The Korea Dairy Committee may be a big obstacle to the change. A board of directors meeting needs to be held to discuss a new pricing system, and more than two-thirds of the members needs to be present. With a total of seven out of 15 board members from the milk producing industry, starting negotiations itself has been hard.

The ministry proposed to the Korea Dairy Committee to delay the price hike of 21 won per liter until the end of year on Aug. 13, requesting a meeting with the board of directors on Tuesday. Despite attempts to tame the price, negotiations broke down as all seven executives on the producer side didn't show up.

"The regulation of the Korea Dairy Committee needs to be modified in order to change the decision making process, but this is also impossible without approval from the board of directors," said an official for the food ministry. "Creating an enforcement ordinance for the Dairy Promotion Act is one of the options that are being considered to solve such problems."

Businesses say that this is not the best time to implement a change in the pricing system as dairy company sales have plummeted during the Covid-19 pandemic. Schools have been closed, and their regular milk sales to elementary schools — a program that provides one carton of milk for each students a day — were cut.

Following the ministry's request for talks, the Korea Dairy & Beef Farmers Association and other dairy producers released a joint statement on Aug. 13.

"The government instigated the producer price inflation, and they're trying to implode the dairy industry," read the statement. "We will not engage in talks with the Minister Kim Hyeon-soo-led food ministry, an organization that puts the burden on farmers to control prices."

Variety does the trick