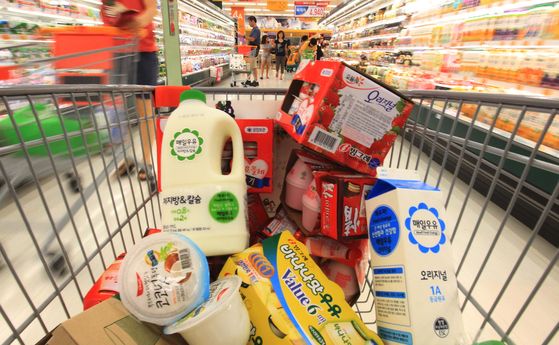 A shopping cart is filled with different types of milk and dairy products. [YONHAP]


In the dairy industry, the price of raw milk is like the minimum wage. Dairy farmers and producers are in a constant tug of war over the price, which ultimately determines how much all sorts of other products cost.

Raw milk prices, intended to be in place for two years starting Aug. 1, are due to be finalized Thursday after four rounds of talks between dairy farmers and dairy producers that started on May 29.

However, the two sides are still yet to find common ground. Dairy farmers argue that a price raise is necessary, considering the costs involved in meeting government standards. The milk industry, on the other hand, wants prices frozen, or ideally lowered, as it struggles with a huge drop in demand due to the coronavirus pandemic.

Every two years, the dairy industry forms a consultative body consisting of milk producers, union heads and dairy company leaders, to set raw milk prices. The final price is later approved by the board of directors of the Korea Dairy Committee and reflected in the price of raw milk produced after August 1. 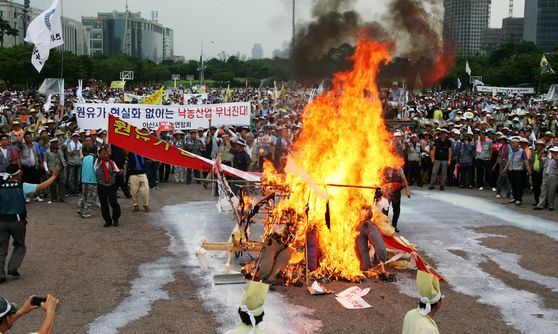 
In the past, discussions have taken place every year. However, talks never progressed as tensions escalated between the two parties. In 2013, the government introduced the raw-milk indexation system, which reflects inflation in the price of raw milk.

Raw milk prices change based on the production cost per liter announced late May by Statistics Korea. The price change is set within 10 percent of the two-year increase from three years before the committee meets to the year before the committee meets. For example, if the production price for one liter of raw milk increases by 100 won ($0.08) compared to two years earlier, the increase will be made within a range from 90 won to 110 won.

Dairy farms want a price raise, arguing that it’s becoming expensive to produce milk and maintain farms. According to Statistics Korea, cattle feed is 6 percent more expensive in 2019 compared to two years earlier. Costs of labor and maintenance have increased by 19.9 percent and 10.5 percent, respectively.

Farmers also point out the cost of renovating cattle sheds, which they are obliged to do after the government introduced legal standards in 2015.

“We need to stay true to the law, which was intended to provide a secure income for farmers,” said Oh Yong-kwan, North Gyeongsang and Daegu branch leader of the Dairy Cooperative.

“It’s unfair to ask dairy farmers to bite the bullet. We will do our best to reach an agreement in the final round of talks,” he added. 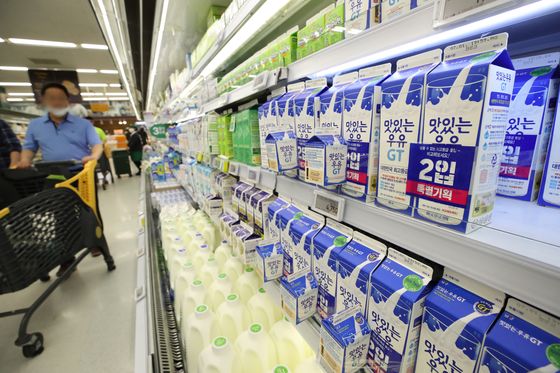 Cartons of milk are displayed on the shelves of a discount store in Seoul. [YONHAP]


On the opposite end, dairy producers argue that a price increase will have a negative effect not only on dairy companies but also on regular consumers. They argue that if prices increase, consumer demand for dairy products will shrink even more.

The dairy industry is estimated to have seen sales shrink about 60 million won from March to May, as schools were closed from the coronavirus pandemic. Schools are one of the biggest customers for milk producers in Korea, since the government in 1981 started subsidizing milk companies to supply milk at a cheaper price to public schools.

Even if these companies produce powdered milk using unsold leftovers, companies claim its still not enough to make up for the losses.

“If prices for raw milk increase, it adds an additional burden to the dairy industry, eventually causing a drop in demand,” said an industry source. “Operating profits for dairy producers are around 2.9 percent. We need to compare that to the 26 percent marginal profit dairy farms take for themselves.”

There are roughly 6,100 dairy farms in Korea.

“If raw milk prices increase like this, it can have a domino effect, later bringing up the price of other dairy products like cheese, butter, ice cream and pasteurized milk,” said another industry source.

In 2018, when raw milk prices increased by 4 won per liter, Seoul Milk increased the prices of its products by 3.6 percent and Namyang Dairy Products by 4.5 percent.