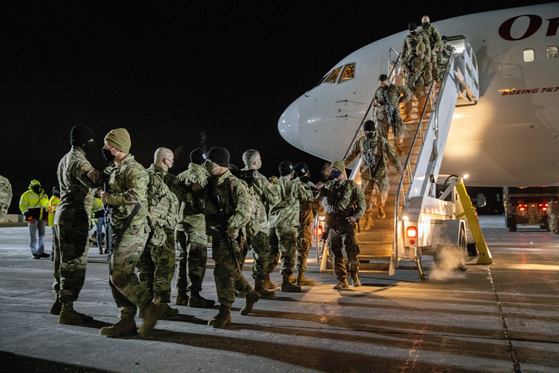 Washington has no plans to withdraw forces from Korea, said U.S. National Security Advisor Jake Sullivan, as it did from Afghanistan.


“As he has said repeatedly, [the president] has no intention of drawing down our forces from South Korea or from Europe where we have sustained troop presences for a very long time,” Sullivan said during a press briefing in Washington on Tuesday.

“It is a fundamentally different kind of situation from the one we were presented with in Afghanistan.”

A day after the Taliban takeover of Kabul on Sunday, U.S. President Joe Biden emphasized that staying on in Afghanistan and fighting indefinitely in the Afghan civil war was “not in the national interest of the United States.”

The U.S. government, which declared war on Taliban in 2001, signed a peace deal with them in February 2020 to pull American troops from Afghanistan, which numbered at about 12,000 at the time, by May 2021.

The agreement, signed by former President Donald Trump, was respected by Biden, who extended the leave date to Sept. 11, 2021. The withdrawal, however, took place weeks earlier, as the Afghan government and its military collapsed.

This speed of the U.S. withdrawal worries some Korean experts, who see the Afghan example as a warning to Korea.

“There have been ongoing talks in Korea about signing an inter-Korean peace treaty, but such a treaty ought to wait until there is complete denuclearization of North Korea,” said Shin Beom-chul, a foreign policy expert at Research Institute for Economy and Society, a Seoul-based think tank.

The two Koreas have been at war since the Korean War (1950-53), which ended with an armistice, not a peace treaty. The United States, which sent the highest number of troops to defend the South during the war at 1.78 million, stayed on afterwards, maintaining around 28,500 troops today.

Proposals for an inter-Korean peace treaty by politicians and experts in Korea have often raised the question of the presence of U.S. forces in Korea, a thorn in the side for North Korea.

Just earlier this month, North Korean leader Kim Jong-un’s sister Kim Yo-jong, who is also vice director of the Workers' Party, demanded the United States withdraw “its troops and weapons of war” from the South.

Since the start of the Moon Jae-in administration, which supports an official declaration ending the war on the Korean Peninsula, some think tanks have published proposals on what such a declaration would say.

The Korea Institute for National Unification, a think tank affiliated with the Prime Minister’s Office, published a draft of a peace treaty in December 2018.

“It would be best to sign a peace treaty with the North once it is about 50 percent denuclearized,” a researcher who worked on the draft told the JoongAng Ilbo at the time.

The paper called for a step-by-step withdrawal of U.S. forces in Korea following such a peace treaty.

It drew criticism from some experts who called the publication “too hasty.”

The last time the United States withdrew forces from South Korea, which was in 1949, it took the North just a year to invade. The United States had maintained forces in the South from 1945 following Korea’s independence from Japan.

History tends to repeat itself, some experts said.

“When you look at what happened in Afghanistan, you see the United States sent out a signal unfavorable to itself by proposing withdrawal of U.S. troops as a bargaining chip in the negotiations,” said Lee Ki-beom, professor of law at Yonsei University.

That U.S. forces in Korea could be a bargaining chip in Seoul and Washington’s negotiations with Pyongyang has been suggested in the past.

Others say the Afghan situation is completely different from Korea’s.

“The Korean Peninsula and the Asian region consist of the core of American national interests,” said Chung Han-beom, professor of international security studies at Korea National Defense University. “At such a time as this when the U.S.-China rivalry is deepening, it’s hard to imagine the U.S. government considering pulling out of the region.”

Korea is second to Japan in the region in terms of the size of U.S. military assets hosted. Japan is host to around 55,000 American troops.

“Korea should actually expect to be asked by the United States to play a bigger role as a partner in the alliance in the region,” said Park Won-gon, a professor of North Korea studies at Ewha Womans University. “The United States has zeroed in on competition with China and the role and function of the U.S. forces in Korea may also change to adapt to this outlook.”

If there is one lesson that Korean can draw from the Afghan case, it may have to do with the attitude of the Korean people, according to a former chairman of the Joint Chiefs of Staff of Korea.

“If South Korea has no will to fight, then the United States cannot help her,” said the former chairman, who spoke in condition of anonymity. He was recalling a comment by Biden on Monday in which he said that Americans shouldn’t be fighting and dying in a war where “Afghan forces are not willing to fight for themselves.” 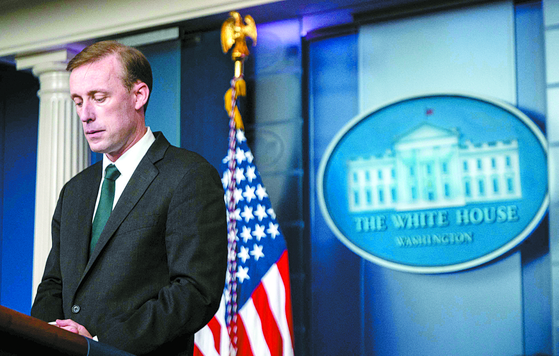 U.S. National Security advisor Jake Sullivan looks on during the daily press briefing on the situation in Afghanistan at the White House in Washington, DC on Tuesday. [ANDREW CABALLERO-REYNOLDS/ AFP/YONHAP]

afghanistan a case for korea usfk