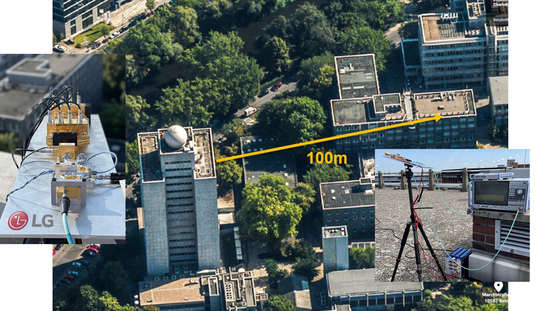 The 100-meter distance over which the 6G terahertz wireless communication signals were transmitted. [LG ELECTRONICS]

Terahertz transmission uses spectrum between 100 gigahertz (GHz) and 10 THz, with maximum speed of 1 terabytes per second, or 50 times faster than peak rates of 5G transmission.

LG Electronics says its power amplifier is one of the key factors that led to the success of the test.

The power amplifier, co-developed by LG Electronics and Fraunhofer-Gesellschaft, enables a stable signal output of up to 15 decibels per milliwatt (dBm) and allows data to be transmitted in a frequency range between 155 to 175 GHz. The signal output is one of the highest in the world, according to the company.

“The success of this test demonstrates that we are one step closer to the upcoming 6G era,” said Park Il-pyung, chief technology officer at LG Electronics. “We will continue to lead in the 6G field through partnerships with research institutes and companies that have adequate 6G-related research and development capabilities.”

The electronics maker also announced that it developed an adaptive beamforming system, a technology that can alter the direction of signals to target receivers in different locations. High-gain antenna switching technology was also developed, combining output signals of various power amplifiers and transmitting them into specific target antennas.

LG Electronics expects discussions to standardize 6G communication to start early 2025 and the technology be commercialized sometime in 2029.