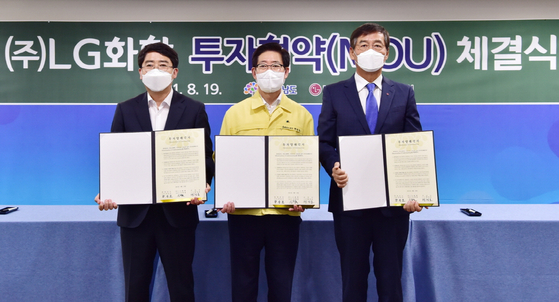 LG Chem is investing 2.6 trillion won ($2.2 billion) through 2028 to ramp up production of eco-friendly materials in Korea.

The chemical company said Thursday it will build 10 factories at the Daesan Complex in Seosan, South Chungcheong, that are dedicated to manufacturing biodegradable material and other materials related to electric vehicle (EV) batteries and renewable energy.

“The investment is part of LG Chem’s sustainable management and also a starting point for the company’s business in eco-friendly material,” Shin Hak-cheol, CEO of LG Chem said Thursday.

PBAT is a fully biodegradable polymer that leaves no toxic residues when buried in soil. It is often used in packaging or for film used for farming.

POE is used in making film for solar panels as well as auto exteriors and electric wires.

LG Chem expects PBAT and POE to both grow by an average of 30 percent each year through 2025 amid heightened awareness of the need to protect the environment.

The two factories will break ground within this year and are scheduled to go into operation by 2024.

The company expects the factories to generate annual revenue of 470 billion won.

When added to 250,000 tons of POE already produced at LG Chem's existing facilities in the Daesan Complex, LG Chem’s POE production capacity of 350,000 tons per year will be the world’s No. 2, according to the company, after Dow Chemical.

The remaining eight factories will be dedicated to making EV battery materials and recycling waste plastic.

LG Chem’s existing facilities in the Daesan Complex, which are on a 1.2-million-square-meter plot of land, manufacture a variety of materials including ethylene, propylene, solution styrene butadiene rubber, poly vinyl chloride and POE.

It is the company’s second biggest facilities after one in Yeosu in South Jeolla.

The latest investment will give LG Chem an additional 790,000-square-meter plot of land in the Daesan Complex.

The city of Seosan and South Jeolla expect 400 local jobs to be created from the deal.

“LG Chem is leading not only the petrochemical industry but also the future of humanity by expanding its business to high-tech materials and life science,” said Yang Seung-jo, governor of South Chungcheong on Thursday.

“The province will try to roll out more policies so that LG Chem can grow more in South Chungcheong."

In July, LG Chem pledged 10 trillion won investment over the next five years to ensure sustainable growth in battery materials, eco-friendly materials and the bio business.