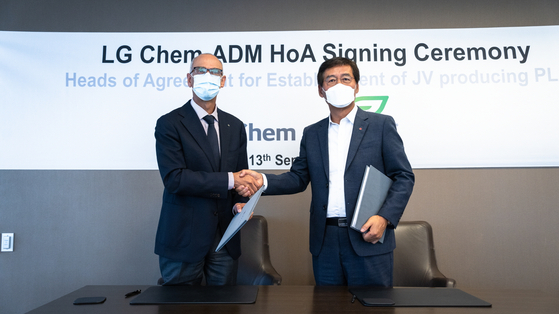 
LG Chem and Chicago-based Archer Daniels Midland have reached an agreement in principle to jointly build a poly lactic acid (PLA) factory in a move to produce biodegradable plastics that are made from fermented corn starch, the chemical company said Tuesday.

Under a non-binding "heads of agreement," the two companies will form a joint venture to construct a PLA factory in the United States. The two will sign a formal contract in the first quarter of next year, with the goal of completing construction by 2025. The factory will have an annual capacity of 75,000 tons.

If constructed, LG Chem will be the first Korean company to build a PLA factory, the company said.

PLA is biodegradable plastic that can be produced from renewable resources. Its raw material, lactic acid, is derived from corn starch through fermentation. The 100 percent bio-based plastic can be used to make food containers or tableware and takes a few months to naturally decompose.

“The establishment of a joint venture with Archer Daniels Midland is not just cooperative but the start of LG Chem’s new journey to transit our business into a sustainable one for the environment and society,” said LG Chem CEO Shin Hak-cheol.

Archer Daniels Midland, a Chicago-based agricultural processor and food ingredient provider, spans businesses in about 200 countries across the globe. It has the capability to manufacture glucose, the key material in biochemical business and core technology to ferment it.

With global companies constantly moving to go green, demand for biodegradable plastics has been on the rise. The size of the global bio plastics market, which is estimated at 12 trillion won ($10.2 billion) this year, is expected to grow to some 34 trillion won by 2026, according to LG Chem.

The factory will allow LG Chem to apply “renewable bio materials in its various products,” as well as have the capability to manufacture lactic acid and secure a “stable supply of materials that are needed to produce PLA.”

With the plant, LG Chem aims to target the global bio plastics market in earnest. It will accelerate its business to commercialize biodegradable resins that can contribute to solving serious environmental issues like climate change and overwhelming plastic waste.

The two companies also promised to cooperate in developing eco-friendly bio materials in the future.