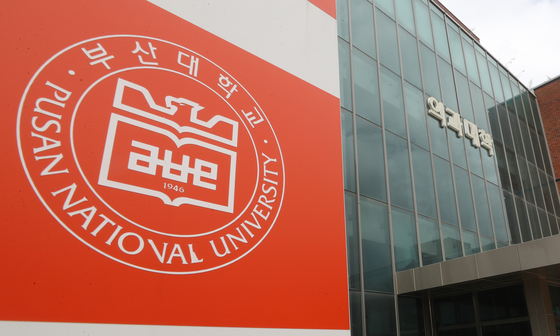 President Yeo Han-sol of the Korean Intern Resident Association held the press conference on Monday and demanded that PNU nullify its admission of Cho Min to its medical school in 2015 in order to stop her from practicing medicine as a licensed doctor. The association has 14,000 members nationwide.

Cho, the 29-year-old daughter of former minister Cho Kuk and Chung Kyung-sim, a professor of Dongyang University, is at the center of the admission scandal. Chung was convicted by an appeals court earlier this month for carrying out a series of academic frauds to help Cho get into college and graduate schools including PNU’s School of Medicine.

In the press conference, Yeo said PNU must nullify Cho's admission to the medical school and her medical doctor degree. By doing so, her qualification to have taken the state medical license exam will automatically become void, and then the minister of health and welfare can use his power to cancel her license, Yeo said.

After passing the state medical licensing exam earlier this year, Cho is currently working as an intern at the Hanil General Hospital, managed by the state-run Korea Electric Power Corporation, or Kepco.

“For the sake of maintaining the qualification of medical doctors and protecting the fairness of the admission system and social justice, Cho’s admission must be null and void,” Yeo said.

He also claimed patients will lose their trust in the medical system if Cho practices medicine despite her lack of qualifications.

“PNU must also lay bare the outcome of its internal investigation in order to prevent a recurrence of similar document fabrications in the future,” Yeo said.

The press conference took place on the eve of PNU’s announcement of Cho’s fate. In April, the university started an internal probe into the admission process of Cho. The investigation panel held its last meeting on Aug. 18, and the university said it will announce the conclusion Tuesday.

During its final deliberation, the panel considered the latest data such as the verdict of the appeals trial of Cho’s mother. She lost her appeal and was sentenced to four years in prison on Aug. 11.

The Seoul High Court upheld the district court’s ruling that Chung had fabricated documents and obstructed the admission process of Korea University and two medical schools including PNU. Chung was indicted on 15 charges and found guilty of all seven charges associated with her daughter’s admission frauds.

In a separate but related development, Korea University is also reviewing the high court’s verdict to make its own decision on whether to cancel Cho’s admission to its undergraduate program or not. If Korea University voids its acceptance of Cho to its undergraduate program, her admission to the PNU’s medical school will automatically be void, because an undergraduate degree is a prerequisite to enter medical school. In this case, Cho’s passing of this year’s Korean Medical Licensing Examination will also be null, and her education status will be reverted to that of a high school graduate.