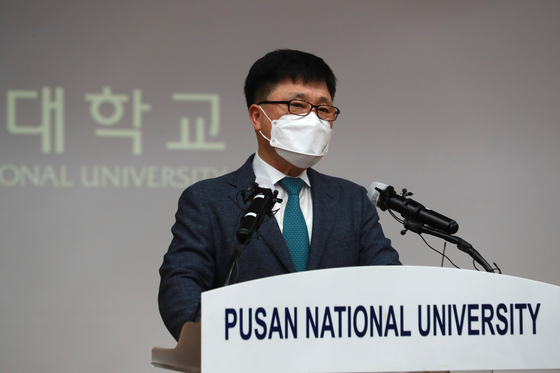 
Pusan National University (PNU) announced Tuesday that it will void its 2015 acceptance of former Justice Minister Cho Kuk’s daughter to its medical school.

Kim Hong-won, vice president of PNU, held a press conference at the school in the southern port city of Busan in the afternoon and announced the university’s decision to cancel Cho Min’s admission to its Graduate School of Medicine. The decision was announced after an internal investigation panel probed the admission process of Cho and analyzed a recent appeals court’s ruling that her mother had committed multiple counts of fraud to help her get into college and graduate schools.

“The admission guidelines used at the time said an applicant will be rejected if any material submitted is untrue,” Kim said.

Cho, the 29-year-old daughter of former minister Cho Kuk and Chung Kyung-sim, a professor of Dongyang University, is at the center of the admission scandal. Chung was convicted by the Seoul High Court earlier this month for carrying out a series of academic frauds to help Cho get into college and graduate schools including PNU’s medical school.

In April, the university formed a fairness review panel to conduct an internal probe into the admission process of Cho. During its final deliberation, the panel considered the latest data such as the verdict of the appeals trial of Cho’s mother.

On Aug. 11, the Seoul High Court upheld the district court’s ruling that Chung had fabricated documents and obstructed the admission process of Korea University and two medical schools including PNU. She was sentenced to four years in prison.

Chung was indicted on 15 charges and found guilty of all seven charges associated with her daughter’s admission frauds.

“The accused got to see her daughter being admitted to PNU's medical school, while another applicant suffered the enormous loss of being rejected,” the high court said. “Her crimes seriously undermined our society’s trust in the integrity and fairness of the school admission system.

“The panel concluded that an award from Dongyang University and other extracurricular activities stated in the application were not crucial factors that had led to her acceptance, but it does not matter whether they were significant or not when we make a decision to cancel her admission.”

Kim said the university originally planned to make a decision on Cho's fate after Chung’s trial was concluded at the highest level, based on the presumption of innocence, but decided to void Cho’s acceptance based on the appeals court ruling because the verdict appears to be sufficient.

For now, PNU’s decision is a preliminary administrative measure. Kim said it will take about three months to formally revoke her admission.

Kim also added that the decision to void Cho’s admission could be reversed if the Supreme Court overturns the high court ruling on Chung.

Chung has appealed the high court conviction to the Supreme Court.

After passing the state medical licensing exam in January, Cho is currently working as an intern at Hanil General Hospital, managed by the state-run Korea Electric Power Corporation, or Kepco.

The Ministry of Health and Welfare said Tuesday that it will start a follow-up administrative measure to revoke her medical license. PNU’s decision to nullify Cho’s admission to the medical school and her medical degree automatically voids her qualification to have taken the state medical license exam.