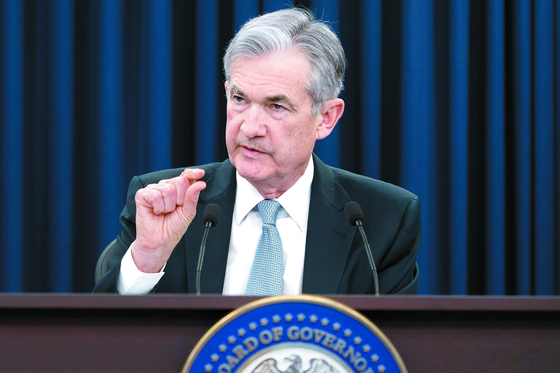 U.S. Federal Reserve Board Chairman Jerome Powell announces a plan to raise the benchmark rate by a quarter of a percentage point in March 2018. [EPA/YONHAP]

“Tapering” literally means “the process of gradually lessening.” Former Fed Chair Ben Bernanke first used the word on May 22, 2013, in relation to the decision to slow down the pace of asset purchase by the Federal Reserve. Since then, tapering has officially been recognized as a financial term.

At the time, the market responded immediately. The 10-year U.S. Treasury yield rose from 1.6 percent in May to 3 percent in September 2013. Global financial markets fluctuated. Emerging markets could not avoid major outflows of capital. Short-term interest rates soared in China after dollars left at once.

The term tapering was first used in marathon, as it refers to adjusting conditions to the event schedule by reducing mileage or speed without changing the frequency of training. According to website Marathon Online, tapering was first coined by Australian Olympic swimming coach Forbes Carlile and physiology professor Frank Cotton in 1947.

Emil Zatopek, who was nicknamed the “Czech Locomotive,” made tapering widely known. In 1950, he started intensive training for the European Championship but ended up in hospital for two weeks. Two days after he was discharged, he won 5,000-meter and 10,000-meter races, breaking his own records. An unintended rest led him to be in his best physical state.

As the Fed suggested possible tapering within the year at the Federal Open Market Committee in July, the Korean stock market plunged. The attention is on the Jackson Hole conference on August 23. Central bank governors and economic experts from major countries gather in Jackson Hole, Wyoming, and possible mentions of tapering cannot be ruled out. Depending on the result, volatility in the global financial market as well as the Korean stock market could grow.

The truth about tapering is simple. Money cannot be released indefinitely, and humans cannot run without taking a rest. Neither financial markets nor marathoners can avoid tapering. Of course, I wish the coronavirus would be an exception.