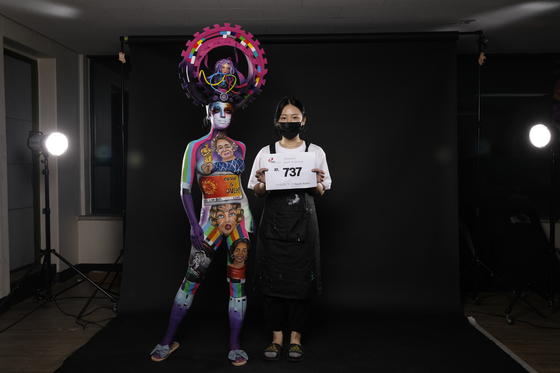 In an email interview with the Korea JoongAng Daily in early August, the teenager from Suwon, Gyeonggi said she was flattered about the win and expressed her gratitude for the people she worked with: Model Anastasia Chetyreva whom she met through the Korean Make-up Artist Association, her art teachers at the art institute she goes to at Suwon and finally, her parents.

WBF 2021 kicked off online on July 19 and ran until the 24. This year marks the festival’s 24th anniversary, and 455 artists from 48 different countries participated in the event. Exquisite works of art come to life each year after the modern bodypainting art movement was established in 1998. Since then it has been making contributions in bodypainting’s recognition as a form of fine art.

This year’s theme was “historical moments.”

“If you were to ask me [about] a historical moment, I would choose ‘the invention of television’ without hesitation,” Ji wrote in her short explanation of her work that was submitted for the competition. “Television [has always] directly conveyed issues happening around the world, made people feel closer to the world’s great [historical figures] and shared hopes [about] life.” 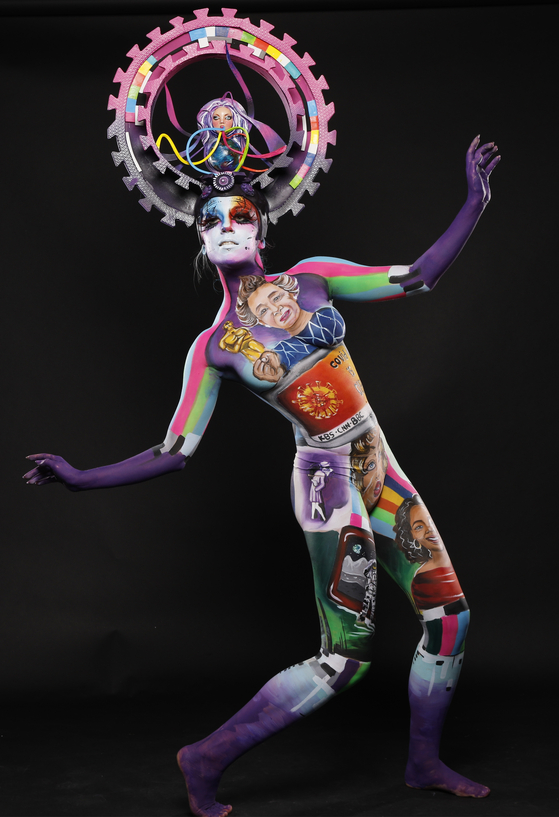 The front side of Ji's artwork elaborately shows historical moments in the history of television. [KOREAN MAKE-UP ARTIST ASSOCIATION]


Chetyreva was painted purple and then had test patterns — the screen you see on television when no programs are being aired at the moment — added.

Ji described the detail of the test pattern as “a screen that [people] watched with anticipation until the [program] came out when [people] turned on the TV.” Test patterns were frequently seen on television in the 20th century.

Chetyreva wore a round, colorful headpiece which Ji described as “a living memory recording device that goes beyond the concept of space and time and connects the whole world.”

Moving on to the body, famous public figures, including Oprah Winfrey and Oscar-winning actor Youn Yuh-jung were depicted. There are also a few notable historic moments portrayed: A picture of a man and woman kissing after the end of World War II, Neil Armstrong’s landing on the moon in 1969 and the 1939 film “Wizard of Oz.” An anchorman telling the news through a television screen was painted on Chetyreva's back. 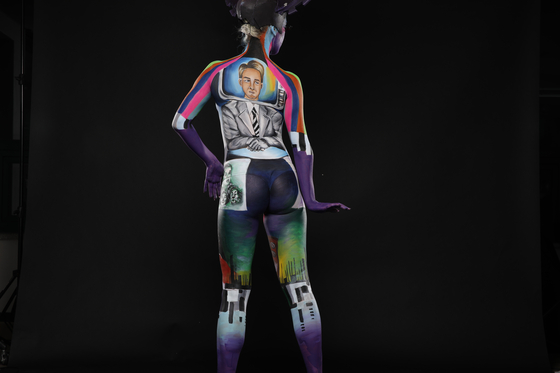 The back of Ji's artwork shows an anchorman speaking through a television screen. [KOREAN MAKE-UP ARTIST ASSOCIATION]


All these details were painted over a full eight hours in one day. Although eight hours may seem more than enough, it was a pretty tight schedule, Ji said. It usually takes a long time for the artist to make a rough sketch, and some additional edits had to be made during the process.

And with the festival shifting online again this year because of the pandemic, there was a newly-introduced rule that had artists to take six pictures of the painting process during the eight hours.

Ji also described the difficulties she faced having to juggle between her schoolwork and preparing for the competition. She said that it was tough not being able to practice painting on an actual model as freely as she normally would have been able to because of the strict Covid-19 social distancing measures.

“It was especially [hard] to paint on [models’] faces because they would have to take their masks off, and it was physically impossible to practice social distancing,” said Ji. “I was only able to work with Anastasia one month before the competition. Most of the time I had to practice on a mannequin.”

Ji’s work shows off colorful, vibrant patterns with distinctive details, but she admitted that she found it difficult to cultivate creative ideas due to the pandemic. She said she found inspiration by getting plenty of rest and learning from the teachers at her art institute in Suwon.

“I learned that inspiration can be found in our everyday lives, like noticing the little things that can be found around us,” Ji said. “Art doesn’t have to be perceived as something hard. Just think of it as something that can be found within yourself and know that the best comes out when you are relaxed. I’ve been trying to change my perception of life by looking at things from a different point of view.” 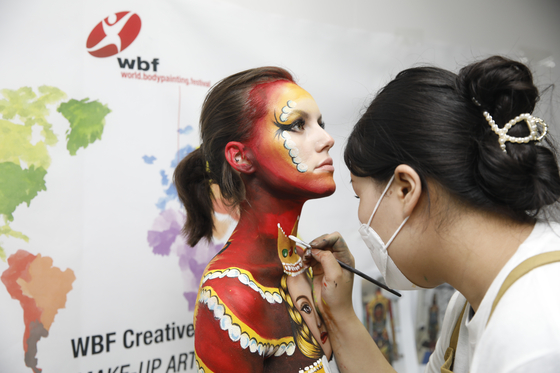 WBF requires the bodypainting to be finished within eight hours on one day. [KOREAN MAKE-UP ARTIST ASSOCIATION]


Ji explained that this was how she got the idea of using television to portray historical moments. “I was watching Oprah Winfrey’s talk show on TV and [I heard her say] ‘failure is defined by how we deal with it,’” Ji said. “[I] was going through a slump at the time, and [Oprah’s advice] gave me strength to look back on my life and [take] a leap forward.”

What makes this year’s event special is that six local participants ranked within the top 10 of the amateur category, all whom, including Ji, are affiliated to the Korean Make-up Artist Association. Park Jung-min, director of the association, attributed this triumph to the highly-successful K-Beauty industry.

“Korea is a leader in beauty products and makeup techniques,” Park said. “It has the world’s best education system on cosmetology, including bodypainting. There are almost 200 colleges that offer beauty-related majors and over 500 institutes that are specialized in this field all across the country.” 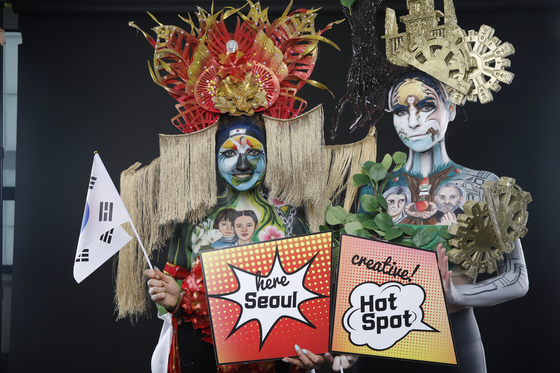 Other models from WBF 2021 contributed to making the colorful, creative works of art come to life. [KOREAN MAKE-UP ARTIST ASSOCIATION]


Still, bodypainting has a long way to go, especially in Korea, because it is sometimes dismissed as “obscene” or “suggestive,” rather than being credited as fine art.

“It’s difficult to find local models because most are reluctant to be nude,” said Park, adding that with this win, she wishes society will become more open-minded about the concept of expressing various themes and ideas through the human body.

“K-Beauty has a bright future,” said Ji. “There are so many opportunities in this field, so it’s difficult for art students [like me] to choose among different career choices. Although Korea is already famous for its advanced makeup techniques, I think the creativity we [art students] have is our greatest asset.”

Next year, Ji becomes a senior in high school and will sit the college entrance exam. She said that she plans on majoring in makeup art.

“I’ve been in a slump, but I’ve also trained a lot for this competition,” Ji said. “I want to repay the assistance and support I’ve received over the years. In the end, I want to improve my art skills and use social media platforms to become an artist that helps other artists too.”