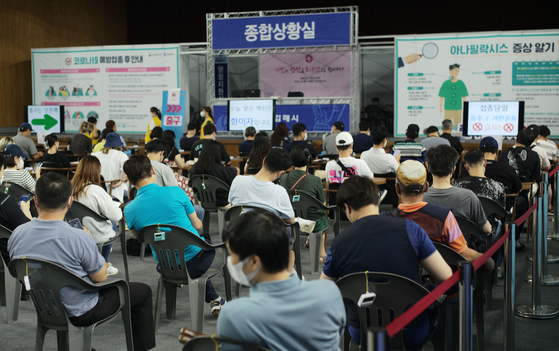 People wait for possible adverse reactions after receiving Pfizer shots at a Covid-19 vaccination center in Gimhae, South Gyeongsang, on Thursday, when inoculations for people aged 18 to 49 began nationwide. [YONHAP]


Korea reported Thursday its highest number of deaths in a single day since the country's most severe wave of the Covid-19 pandemic, along with a surge in severe cases and overall infections.

The country added 20 more deaths over the past 24 hours, the highest daily figure since the fourth wave of the pandemic hit the country in July. The death toll now stands at 2,257.

Health authorities expressed concerns that the number of deaths will continue to rise unless the total number of confirmed cases is brought under control.

“The number of critically ill patients tends to increase one to two weeks after an increase in the total number of confirmed cases, and fatalities follow,” Son Young-rae, a senior epidemiological strategist at the Central Disaster Management Headquarters, told reporters on Thursday.

Korea’s medical system has long been overwhelmed by the sharply rising number of critically ill patients and fatalities.

Patients in critical condition — those who require high flow oxygen treatment, mechanical ventilation or being put on a respirator, extracorporeal membrane oxygenation (ECMO), or continuous renal replacement therapy (CRRT) — stood at 425 on Thursday. This is the second-largest tally, with the highest record registered the previous day at 434, ever since the country started recording the number on March 28 last year.

The Korea Disease Control and Prevention Agency (KDCA) said only 30.3 percent of the total 833 I.C.U. beds were vacant as of 5 p.m. Tuesday, while medical workers on the site say the availability is actually lower due to the shortage of skilled medical personnel able to take care of such patients.

Mass contact tracing of Covid-19 patients, which is one of the key components of the so-called “3T strategy” of Korea's antivirus measures including testing, tracing and treatment, has already reached its limit due to the surge in infections hovering around 2,000 daily.

Of the 25,240 reported cases from Aug. 12 to 25, 32.8 percent of the total, or 8,270 patients, are untraceable, according to the KDCA. The speed of the virus transmission is now exceeding the pace of epidemiological investigation.

These days, many health workers are facing burnout and depression.

Members of the Korean Health and Medical Workers’ Union (Khmwu), an estimated 56,000 people, are planning to go on a nationwide strike on Sept. 2. if the government does not implement solutions to their problems such as more manpower in health sector. 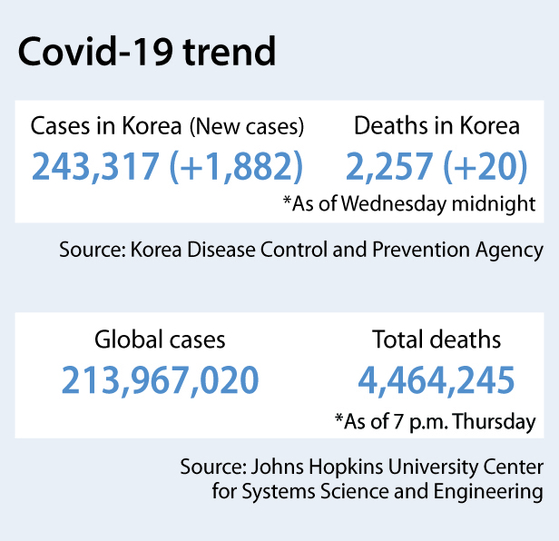 Once praised as a role model for other countries, “K-Quarantine” — or Korea’s anti-virus measures that have been a source of national pride — is now on the verge of collapse, health experts warned.

“'K-Quarantine’ is on the verge of collapse, relying solely on the dedication and sacrifice of health care workers without expanding manpower and resources,” it said. “The government should significantly increase its capability for tracing and treatment of contacted patients — the fundamentals of K-Quarantine — by swiftly expanding medical personnel and resources.”

The committee also raised questions regarding Korea’s social distancing scheme, which limits private gatherings and business hours depending on the number of infections.

"The current social distancing measures were effective in the early days of the coronavirus outbreak, but it is less effective when considering the invested social costs," it wrote. "The distancing scheme should be supplemented in order to increase social equity and effectiveness."

Studies also showed that the efficacy of the current distancing policy is low.

A research team, led by Prof. Hong Yun-chul of Seoul National University’s department of preventive medicine, tracked the amount of movements of people along with the government’s distancing measures, and found that the longer the distancing measures were kept, the less impact it had on reducing people's travels.

“In the first and second waves of the pandemic, people’s movements decreased along with the distancing measures, but in the third and fourth waves, they decreased for a short time before retrieving,” Hong said.

“People are complaining of extreme fatigue due to the prolonged Covid-19 pandemic,” he added.

Many self-employed and small business owners were driven to close their businesses due to the social distancing measures. Some gathered in front of the National Assembly in Yeouido, western Seoul, last Saturday to hold a protest-like “walking” event calling for a fundamental change in the government’s distancing measures.

“In order for K-Quarantine to be sustainable, it should be shifted from measures covering administrative regulations to civic participation,” the joint committee said.

“The government should develop a platform that allows voluntary citizen participation while protecting their private information by utilizing the world's best network infrastructure and technology,” it said.

Health authorities said they are considering tentative “With Corona” plans, or a long-term Covid-19 strategy focusing on managing severely-ill patients instead of daily new infections.

KDCA commissioner Jeong Eun-kyeong announced Thursday that at least 90 percent of the elderly and 80 percent of adults must be fully vaccinated in order for the country to shift to a “living with Covid-19” phase.

“The preconditioned vaccination rate should be brought up as much as possible by the end of October […] and the medical response system should be systemized to reduce the damage in case of a transition to ‘With Corona,'” Jeong said.

However, she explained even if the country moves toward a different Covid strategy, it doesn’t mean they will immediately ease social distancing measures or other preventive rules, and indoor mask mandates will still need to be maintained until the very end.