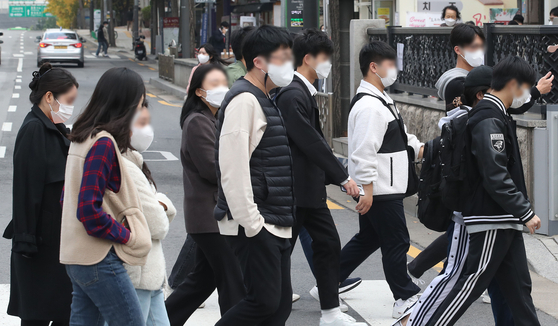 University students return to campus to attend classes in person as the nation’s phased return to normalcy, otherwise known as “With Corona,” began Monday. [NEWS1]


It has been two long, quiet years for universities across the nation.

An uncharacteristic calm had blanketed Korea's campuses during the Covid-19 pandemic as the usual hustle and bustle of young men and women were nowhere to be found, and the streets of university districts that once teemed with students were deserted.

But the phased return to normalcy, which kicked off Monday, is breathing new life into Korean campuses, and events that had been considered the epitome of a Korean college life, such as festivals and drinking gatherings, are making a return.

From Tuesday to Friday, Seoul National University (SNU) will host its festival in person for the first time since the outbreak of the virus.

The festival itinerary includes performances by the school's hip-hop dance crew and rock band, according to SNU.

Attendance will, however, be limited to only about 70 audience members. Before Covid, SNU's festivals were enjoyed by hundreds of students.

Dankook University jumped the gun and hosted their fall festival on Friday, before the new Covid policy began. That event was held both on and offline.

Under the theme of hit Netflix Korea series "Squid Game," the festival staff dressed up as the show's armed masked guards in pink jumpsuits and students played childhood games that appeared on the show, such as "Red light, green light."

Hundreds of students again crowded campuses as they returned to take small- and medium-sized classes offline for the final two months of the fall semester.

SNU had already been implementing offline classes for half of its academic program.

"As life returns to normal, I finally feel like an actual university student," said Kim Myeong-hun, a freshman at a university. "I am beyond excited to meet face-to-face with the members of my classes."

As schools reopen, businesses in university districts are also springing back to life.

Restaurants in the university hub of Sinchon, western Seoul, said that they are seeing more customers during both lunch and dinner hours.

"Three people called yesterday to make reservations for today [Monday]," said Lee Sang-du, owner of a jeon (Korean pancake) restaurant in Sinchon. "I used to stay open only until 2 p.m., but today, if more customers come, I may stay open until 5 p.m."

Lee said that he has had to curtail his restaurant hours and minimize his staff to two people in order for his business to survive the pandemic.

"As reservations come in and I see more students out on the streets, I feel like I can finally breathe," said Lee.

Other restaurants in Sinchon said that they, too, have gotten many group reservations.

"I received a reservation for 10 on Monday," said Kim Jong-cheol, a samgyeopsal (pork-belly) restaurant owner.

A 24-year-old student surnamed Lim said he saw more people coming out to the streets and drinking in groups since the weekend.

"I went out to drink yesterday in Sinchon and saw a few college clubs gathered at the bar drinking together," said Lim. "It's probably been a year since I've seen such a scene."

Amid the frenzy of returning to normal, worries of potential virus outbreaks at schools still remain.

The Ministry of Education said that Wednesday's daily caseload included 437 students. This marks a new high of daily cases for students aged 6 to 19.

Universities are also weary of the virus; many require students to have completed vaccination at least two weeks prior or submit a negative Covid-19 test result from within the last 48 hours in order to attend classes or school events.

In order to prevent any further spread of the virus in educational facilities, the Ministry of Education has advised that all students wear a mask that can filter at least 80 percent of fine particles, or a KF80 or above.

Korea's phased return to normalcy started 5 a.m. on Monday. The new Covid-19 policy allows gatherings of up to 10 people in Seoul, regardless of vaccination status. Also, the 10 p.m. curfews for most businesses have been lifted and can now operate around the clock.