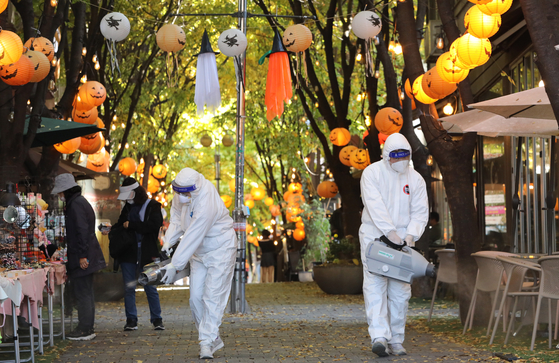 Health authorities disinfect the streets of Giheung District, Gyeonggi, on Wednesday, ahead of Halloween. [NEWS1]


The number of daily Covid cases soared to nearly 2,000 on Tuesday, one day after Korea unveiled plans to return to normalcy next week.

The number of new cases on Tuesday totaled 1,952, including 1,930 local infections and 22 overseas infections, according to the Korea Disease Control and Prevention Agency (KDCA).

The latest count is 686 cases higher than the count on Monday, which was 1,266. It is the highest number of cases in 18 days.

“The number of new cases, which had been on a general downward trend for the past three weeks, is displaying a rebound this week” said Son Young-rae, senior epidemiological strategist, during a briefing Wednesday.

“We believe that the recent spike is due to a few causes, including relaxed social distancing rules that began last week and the anticipation of return to normalcy next month.”

Last week, the government introduced the nation’s last set of social distancing rules before shifting to return to normalcy in November. The current rules permit gatherings up to eight people if four are fully vaccinated.

Officials were especially weary of the spike as it comes ahead of Halloween this weekend.

Warning citizens of the potential dangers of partying during a pandemic, Son said, “People should avoid gathering indoors and taking part in activities such as singing, eating, drinking alcohol and dancing.”

He also added that authorities will be cracking down on any violations of social distancing guidelines around Halloween, particularly in hangout areas popular with young people.

As temperatures are falling across the nation earlier than expected, Son reminded people to open their windows and ventilate.

The guidelines distributed by the KDCA say that ventilating three times per day for 10 minutes decreases the chances of becoming infected by the virus by one third.

Son emphasized the effectiveness of vaccines against the coronavirus.

“Government studies show that 60 percent of fully vaccinated individuals show clear immunity toward the virus, and 90 percent are less likely to develop a serious illness that can lead to death,” said Son.

Even with worries about a prolonged fourth wave of the virus, Korea’s phased return to normalcy will proceed as scheduled on Monday.

Starting Nov. 1, casual gatherings of up to 10 people regardless of their vaccination status will be allowed, and cafes and restaurants will be able to operate around the clock.

The government will also implement a “vaccine pass” system starting next week, which means that people will need to show proof of vaccination to enter some kinds of facilities such as indoor gyms, karaoke bars and night clubs.

Restaurants and subways will not require a vaccine pass.

In response to criticism that restaurants should require a vaccine pass, Son described Korea’s vaccine pass system as one that will limit, and not ban, the unvaccinated from functioning in society.

“While restaurants and cafes have proven to be locations for a mass spread of infections, eateries are considered an essential place for some to get food."

Even with the recent spike, around 60 percent of hospital beds for Covid-19 patients remain vacant as the number of patients receiving at-home treatments has risen to a total of 2,132 as of Tuesday, according to the KDCA.

Also as of Tuesday, 71.5 percent of the nation or 36.71 million people had been fully vaccinated.

The cumulative caseload now stands at 356,305, according to the KDCA.

A total of nine deaths were reported as well, raising the nation’s death toll to 2,797.