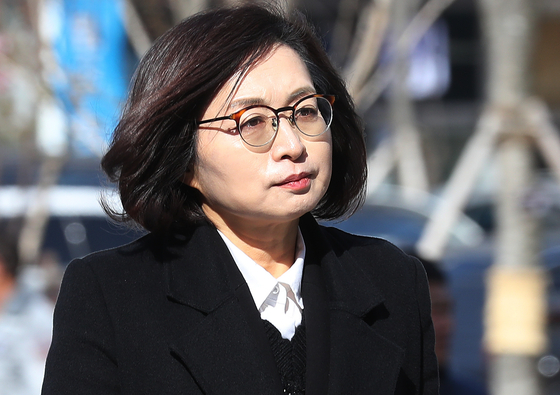 
Seongnam Mayor Eun Soo-mi on Thursday issued an apology after a male city worker compiled a list of young, single female public servants and offered it to the her aide to scope out a potential match.

“This is an unimaginable and unacceptable incident,” Eun said. “I offer my sincerest apologies to the victims and I will take all necessary measures.”

Local media reported for the first time Wednesday that a worker of the Seongnam City Government’s human resources team had created a list in 2019 compiling data of 151 single, female public servants in their 30s. The worker, who was a grade-6 civil servant in the nine-grade system with grade 1 being the highest, offered the list to Mayor Eun's secretary at the time.

The list, as reported by media, included the names, photos, ages, positions and grades of the 151 female public servants.

In her apology posted in the city’s administrative portal system on Thursday, Eun vowed to do all she could to prevent any damage to the victims on the list.

The city government said it confirmed that the list had been created by the worker in question, and it was conducting an investigation into why he had done so.

“He admitted that he had created the list,” a city official told the JoongAng Ilbo. “He, however, said he could not remember why he had made it.”

According to sources in the media report, Eun's former secretary recently filed a petition to the Anti-Corruption and Civil Rights Commission about his receiving of the list. The man was a member of Eun’s mayoral election campaign and served as her secretary until March last year.

According to the former secretary, he was offered the list from a manager-level public servant of the human resources team, not the creator of the list, in 2019. The former secretary said the deliverer told him to “pick a female worker that you like” from the list.

He told the commission that the list was clearly intended to bribe him, because he was serving a powerful post as the secretary of the mayor at the time.

This is not the first time that Eun’s former secretary filed a whistleblowing report to the commission. In November last year, he informed the commission of a suspicion that 27 associates of Eun were unlawfully hired in the city government, city library and other organizations affiliated with the city. The case is currently being investigated by the police.

Eun, former presidential secretary for gender equality and family affairs of the Moon Jae-in Blue House, was elected the mayor of Seongnam in June 2018.

She was convicted in July last year of violating the political funding law because a former mafia member-turned-businessman paid for her driver for one year since June 2016. She was fined 900,000 won ($770) and allowed to maintain her post. An elected public servant loses his or her post if a criminal conviction accompanies an imprisonment or a fine above 1 million won.