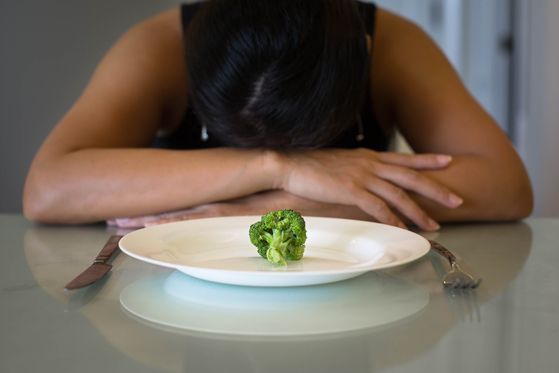 
In the summer of 2021, social media in Korea was flooded with photos of thin, muscular and attractive bodies.

Granted, social media has always been brimming with the beautiful, but there’s another reason why people were flaunting and flexing their muscles in these photos: Dubbed as “body profile” in Korean, one of this year’s trend among the MZ generation (millennials and Generation Z) is taking profile pictures that only show off their bodies instead of their faces.

According to data analysis platform Black Kiwi, the key word search of body profile in Korea surpassed 500,000 over the course of the year so far. On Instagram, hashtags of body profile exceeded 2 million.

“It’s definitely true there’s been a drastic influx of clients registering for fitness centers with the purpose of taking body profiles,” a freelance trainer and YouTuber Shin Choong-woo said. “The reasons are, first, I believe is due to the influence of social media, like Instagram, as more people see others taking these photos, which stimulate them to prep their bodies for such photos as well. Moreover, I feel that the general age group of gym clients has gotten younger. More people in their youth, starting from their teens to 20s, are starting to work out in gyms.”

“I also think the Covid-19 pandemic has something to do with this trend,” a 34-year-old who only wished to be identified by her surname, Kim, told the Korea JoongAng Daily. Kim took her photos after four months of swimming, CrossFit and jogging. “I believe that more people became concerned with their health as they were confined to the indoors and lacked exercise due to the coronavirus. Plus, it could be a way to overcome their corona blues.”

As a way to motivate themselves, people working to get body profile ready often make a reservation at a photo studio so that they have an end goal to work toward. They increase their activity in a bid to increase their overall muscle mass while reducing their body fat and limit their diets to greens, chicken breasts and sweet potatoes. 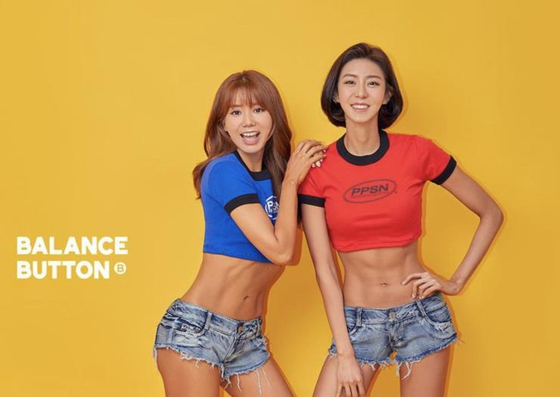 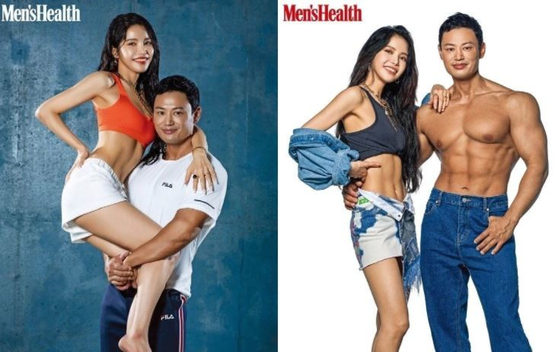 Top and above: "Body profiles" of celebrities such as singers U-ie and Solar, who joined in the ongoing trend of youths showing off their muscular bodies on social media. [MEN'S HEALTH]


“It took me exactly five months — I began preparing to take my body profile in mid-February and took them in July,” said Kim Si-hwon, aged 30. “My main course of exercise was fitness training. I also did CrossFit on the weekends, and frequently went out for a jog before I began working from home due to social distancing measures.

“My trainer told me that body profiles became another opportunity for fitness trainers, commercially,” he continued. “Several of the trainers would form partnerships with photo studios to directly connect their clients to the studios. And they would use the photos to stimulate other gym clients to get them to start preparing for body profiles as well and expand their consumer base.”

It has also become a trend for YouTubers to record and upload their weekly progress right up to the moment they take the photos at the studio. The sweetness of success, however, is short-lived. The moment the photoshoot is over, people immediately head out to gobble up food nonstop for the rest of that day. An array of YouTubers have accepted this profile challenge and frequently upload their progress pictures. Some also upload the moments after the photoshoot as they ravenously devour all the food that they've been forbidden from eating for the months prior.

About one or two months later, the same YouTubers upload videos titled “I regret my decision to take body profiles.”

“If I’d known about the aftermath of body profiles, I probably wouldn’t have taken them,” said a YouTuber in her video uploaded in April who runs the channel Somzzi with 8.2 million followers. “After taking the photos, I thought I’d be more free from the pressure of losing weight [...] On the day I took the photos, I ate constantly for the next 12 hours. I ate bread, cake and haejangguk [a soup with cow’s blood, beef, intestines and vegetables] then I went home and ate pizza, chicken and tteokbokki [spicy rice cakes] and then went out to drink alcohol and eat beef intestines.” 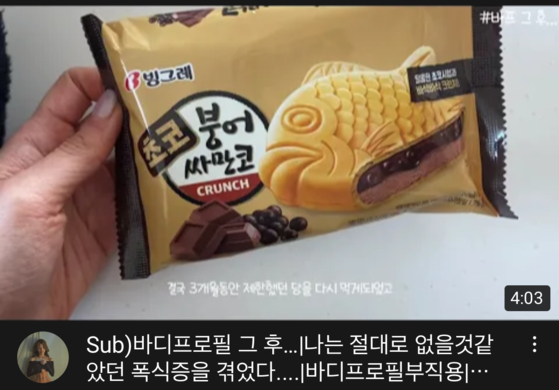 YouTubers document their journey for a ‘body profile,’ including the binges they go on after they have taken their photos. [YOUTUBE CAPTURE]


The YouTuber goes on to say that she felt so repressed and stressed out from her diet that she went on an eating binge.

Many YouTubers have uploaded videos with similar content, admitting to their viewers that they’ve actually gained more weight than before they started the body profile process.

“I’m also suffering from the rebound,” Kim said. “Since I had a specific goal, I was really tense until the D-Day. I worked out six days a week and reduced my diet to half of what I originally ate. But after the photoshoot, I wanted reimbursement for all of my hard work. So I ordered tons of delivery food that I couldn’t eat before, and I slacked off on working out as well, going to the gym only three times a week. In the beginning, I maintained my slim figure despite the sudden influx of calories, but as the muscle mass was reduced, my body fat increased substantially and now I’m back to ground zero, the exact weight I had been before I started this project. I’m actually really stressed out from my weight gain.”

A 24-year-old who wished to be known by her surname Han, however, still thinks that the challenge is worth a try.

“I was already thin, and as I cut back on my diet my family was worried for me and asked me why I was making myself unhealthy,” Han said. “I think it’s more hazardous for women because it might affect their hormones and menstruation cycle as they drastically reduce their body fat in a short amount of time.

"Nonetheless, I think it’s a once-in-a-lifetime goal that anyone can go for and feel a sense of accomplishment. I don’t think preparing for body profiles is any different than those preparing for a contest like bodybuilding, but complications arise when people attempt to achieve their goal in a short span of time.”

Singer Kim Jong-kook who runs his own YouTube channel “Gym Jong Kook” which focuses on exercise and workouts, negatively views the concept of working out for the sole purpose of taking photos.

“Although it’s for the self-satisfaction, I don’t understand why people put all of their focus on that one photo,” he comments in a recent video. “You can’t bet your life on that one photo. Life itself is an endless video. You should live your life with that in mind.” 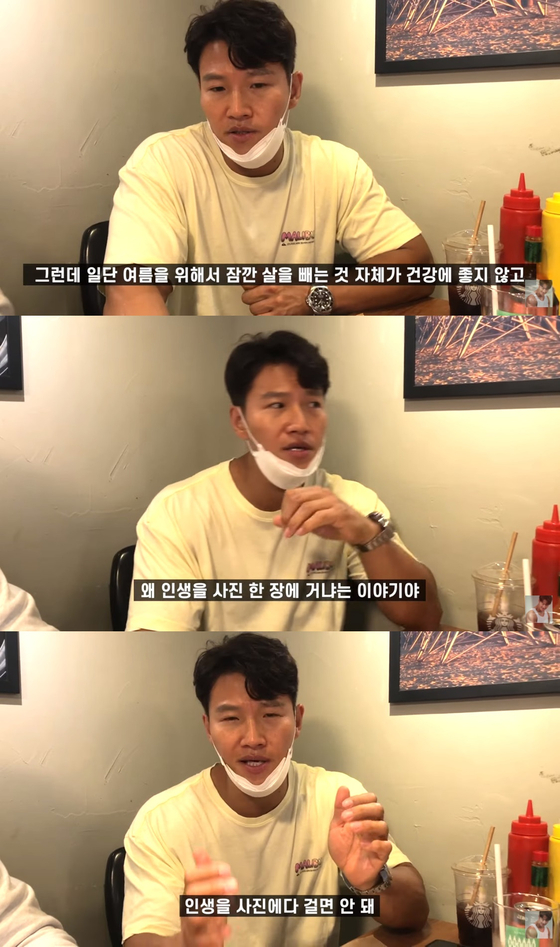 Singer Kim Jong-kook, who runs his own YouTube channel on physical training and exercise, advises his viewers to work out with a long-term goal for their health.[YOUTUBE CAPTURE]


“The scale of the rebound is proportional to how much you strain your body,” said Pilates instructor Han A-rem. “So in order to reduce the side effects of weight gain, it’s best to find ways to get in shape that you actually enjoy. Try to find healthy food with less calories that you actually like and to gradually increase the intensity of your workouts. You need to give time for your body to adjust to the change. I agree with the statement that the body profile trend has become a means to show off rather than to build up a healthy body.”

“You can prepare for the photoshoot while consuming food that you eat every day, but people usually take it too far,” Shin said. “It is true that eating chicken breasts and vegetables is more effective to define your six-pack but you can also create a diet plan that suits your tastes,” he said.

"For instance, you don’t have to eat sweet potato if you don’t like it. Instead, find other kinds of carbs, such as brown rice, or potatoes. At the end of the day, what matters is that you fill up your quota of carbs. There are many different ways to spice up and cook chicken breasts, and you can also substitute them with mackerel and other meat as well [...]You need to figure out your plans on how to maintain your fitness before your diet ends. That way, you can continue to work out and lead a healthy life after your diet is finished.”