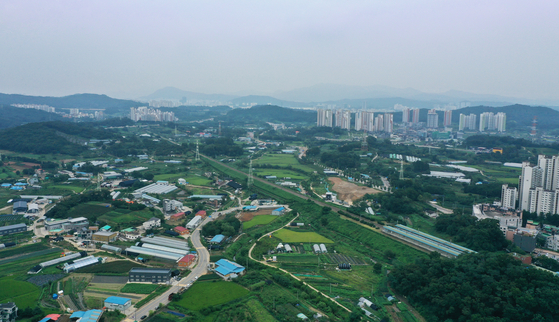 A view of Banwol in Ansan, which will be part of a new town of 41,000 apartments. [YONHAP]


The government on Monday announced "new town" plans that will build 120,000 apartments in the greater Seoul area and 20,000 in Daejeon and Sejong.

The two largest projects – one in a project that straddles Euiwang, Gunpo and Ansan in Gyeonggi, and another in Hwaseong City – will add 70,000 apartments to the southern region of the greater Seoul area.

According to the Ministry of Land, Infrastructure and Transport, 41,000 apartments will be built in the new town that straddles Euiwang, Gunpo and Ansan. The new town will be in a 5.86 million square-meter area between Gwacheon and Suwon.

New towns planned by the Moon Jae-in government are the third wave of such developments. The Euiwang, Gunpo and Ansan project is the third largest announced by Moon.

The largest is in Gwangmyeong-Siheung with 70,000 apartments, followed by Wangsook, a neighborhood in Namyangju, in the western part of Gyeonggi province, with 66,000. They were announced earlier in his administration.

The government stressed the Euiwang, Gunpo and Ansan town is only 12 kilometers from Seoul’s southern border.

Once the infrastructure is complete -- including a GTX-C high-speed commuter rail -- it will only take 20 minutes for residents to reach Gangnam.

Currently it takes about an hour using a bus or car.

Some 29,000 apartments will be built in the Jinan new town in Hwaseong, near Suwon and Dongtan New Town, which will be 4.52 million square meters.

The government estimates commutes of about 20 to 25 minutes to Seoul from that new town once high-speed rails are set up.

Smaller projects are planned for five other areas including Guwol in Incheon and Jingeon and Namyangju, with 2,000 to 18,000 apartments.


Real estate prices, especially in the greater Seoul area, continue to rise despite a myriad of attempts by the government to cool them off.

According to the Korea Real Estate Board, apartment prices nationwide rose 0.3 percent as of Aug. 23 compared to the previous week. In the greater Seoul area, they rose 0.4 percent.

Prices in Seoul alone -- without Incheon and Gyeonggi -- rose for the fifth consecutive week and were 0.22 percent higher than the previous week, the fastest weekly increase in nearly three years.

The Moon administration tried cooling the market by tightening loan standards and raising taxes. As apartment prices continued to rise, it is trying to increase the number of apartments.

The Land Ministry on Monday stressed that it conducted a preliminary investigation to prevent any illegal profiteering from use of inside information.

It said while two Land Ministry employees and a Land and Housing Corp. (LH) employee owned land in the areas being developed, it found no illegal activities as the land was either inherited or purchased years ago.

“We thought it was important to find any illegal speculative activities, so we investigated with the help of the police, which led to postponing the announcement, which was supposed to be made in April,” said Yun Seong-won, vice minister.

However, Yun said the government did find 229 cases of suspected illegal activity, but none involved civil servants.

Earlier this year, several LH employees were accused of profiteering through inside information on a major development project.

That scandal led the ruling party to lose by-elections for mayoral seats in Seoul and Busan in April. 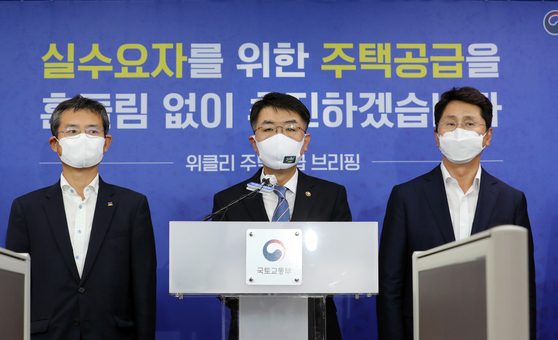 [WORD_ON_THE_WEB] 'Regulations on reconstruction must be lifted'