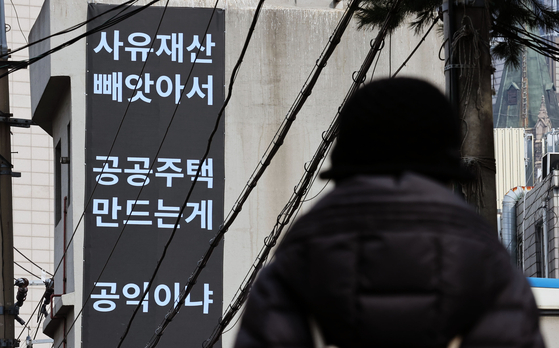 A sign opposing to the government's public-led redevelopment project at the jjokbangchon village, which is a cluster of single-room housing units for low-income tenants, hangs in Yongsan, Seoul on Feb. 14. [YONHAP]

While it has intervened in the housing market in the past and managed major redevelopment projects, this time is different.

The recent plan involves government-owned developers, including local governments, taking over the land that is privately owned and pushing forward with the projects.

It is such a novel plan that the government needs to reform some regulations to get it to work.

To build in the 250,000 units in the centers of cities, the government plans to use the Special Act on Public Housing, which has been previously used as the legal foundation for new towns on the outskirts of Seoul.

The biggest controversy surrounding this legislation is that it does not require the government to secure the consent of the landlords in purchasing the land.

This issue could create strong resistance from landlords and current residents who may feel their property rights have been violated.

The Special Act on Public Housing was created to allow the government to transfer the ownership of raw land for development. The goal of the legislation is to increase the supply of government-owned rental apartments built on publicly-owned land.

This legislation has been used in building new towns. Under the law, the government purchases the privately-owned land for a reasonable price without the consent of the landlord before the development plan is announced publicly. Secrecy is key.

Although the landlords may feel cheated as the value of the land that they owned could surge sharply once the government development plan is announced, until now there hasn’t been any major conflict as this legislation was applied to unused land, especially that heavily restricted from development, such as land within the greenbelt.

The latest plan proposed by Minister Byun Chang-heum is different as the government will apply the housing law to land within the city, where ownership can be complicated and demand high.

Imposing a price won’t be easy.

There is strong resistance from landlords about the redevelopment of a so-called jjokbangchon, a cluster of single-room rent, in Yongsan as the current Special Act on Public Housing is applied. The landlords are arguing that the government is infringing on their property rights.

The government is also working on revising the Act on the Improvement of Urban Areas and Residential Environments, which is the legal basis for zone redevelopment or apartment reconstruction projects.

The purpose of the legislation is to update outdated residential and commercial buildings.

Under the current law, 75 percent agreement is needed. However, the government is planning to ease the regulation to require only 67 percent.
The lowered consent will allow the government to push forward with redevelopment or reconstruction even if one third of the landlords disagree.

The ministry said it will not steam roll those against redevelopment.

“[The lowered consent requirement] doesn’t mean we will push through with the [redevelopment and reconstruction] projects even if one third opposes,” said a Land Ministry official, who requested anonymity.

The government dismissed concerns that the recent proposals violate property rights, saying the compensation will be fair and that the goal is public interest.

It said if the government-owned developers are involved, the projects will move through quickly and that even landlords will profit.

The government stressed that because this new proposal is focused on public interest, unlike projects that are led by the private sector, which is profit seeking, both the landlords as well as the tenants will be satisfied.

Some market experts have raised concerns on future conflicts, especially surrounding the government’s “fair” compensation of landlords when purchasing the land.

“The landlords look to profit from future development,” said Park Il-gyu, Joun Law Firm lawyer. “However, the public developer compensates at its current value while excluding the potential profits from development. And for this there could be conflict as the landlord may not consider it as fair.”

The government is strongly arguing that because of the complicated web among different parties, public development is the only solution in regarding for developing land within the city.

As such, the state-owned Land and Housing Corp (LH) and the Seoul city government-owned Seoul Housing and Communities Corp (SH) have been expanding, including increasing the number of new hires.

In the case of LH, its debt as of last year was 131 trillion won ($118 billion). And when including the spending that LH will make in purchasing the land for redevelopment and reconstruction under the Feb. 4 housing supply plan, there are projections that the state-owned developers debt will expand to 200 trillion won by 2024.

Also recently, controversial moves from LH’s past have resurfaced.

In 2010, LH jumped into a zone redevelopment project in Seongnam, Gyeonggi, playing a similar role as the one proposed in the Feb. 4 measures.

LH pulled out due to severe conflict with the residents as well as lack of profitability.

At the time, there was a public backlash against the state-owned developer for the way it handled the zone redevelopment, saying it was no different from private developers that put profits over public interest.

There’s also the concern over negotiations with local governments.

Under the proposals, the areas that will be redeveloped will account for 60 percent of the land in Seoul, excluding green areas and existing roads.
This is not sitting well with the Seoul city government as almost all areas in Seoul will be under construction of some sort.

Concerns are being voiced about reckless development as the plan is being led by the central government, which is adjusting the plan accordingly to its housing supply needs.

Experts say in development plans various factors have to be taken into account from multiple angles, including the traffic congestion, privacy invasion as well as sunlight blocked by high-density development.

Concerns about the nominee