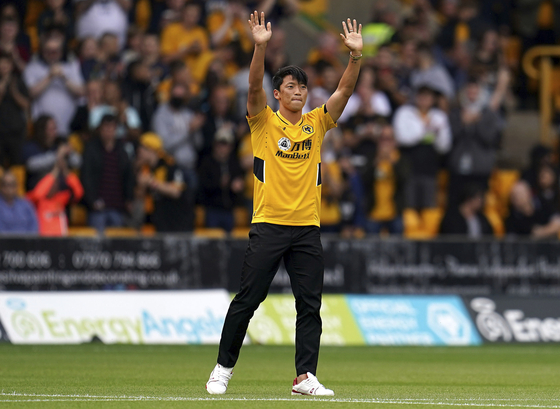 Wolverhampton Wanderers new signing Hwang Hee-chan is unveiled to the crowd prior to the kick-off of a game between Wolves and Manchester United at Molineux Stadium in Wolverhampton, England on Sunday. [AP/YONHAP]

Hwang joins Wolves on loan for the entirety of the 2021-22 season, with the club reportedly maintaining the option to buy Hwang for £12 million.

Hwang could be a considerable boost to a Wolves offense that are yet to score so far this season. He is a key part of the Korean national team, with 37 caps and six goals to his name.

Wolves have played and lost three Premier League games so far this season, all 1-0, against Leicester City, Tottenham Hotspur and Manchester United. The fact that all three games were lost by such a small margin suggests that Wolverhampton's defense is relatively sound, but it is unable to convert in attack. That could be a huge opportunity for Hwang to quickly carve out a role at the front of the lineup.

Currently, Son Heung-min of Tottenham is the only Korean player active in the Premier League. With two days left in the summer transfer window it is unlikely, but not impossible, that any other Korean players will join Son and Hwang in England.


Center back Kim Min-jae was linked to a number of clubs, but has now moved to Fenerbahce in Turkey. Bordeaux's Hwang Ui-jo and Valencia's Lee Kang-in have also seen interest from Premier League clubs, but with Lee set to move to Mallorca and Bordeaux keen to keep hold of last season's top scorer, it seems unlikely either will move this year.

Hwang's start with Wolves will be delayed as he rejoins the Korean team this week for a pair of qualifying games for the 2022 Qatar World Cup.