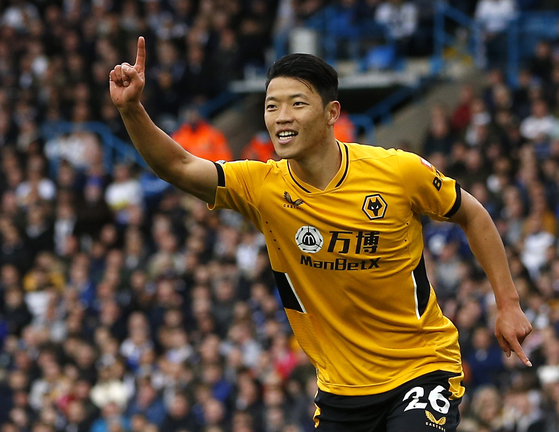 
Hwang Hee-chan's explosive start at Wolverhampton Wanderers has gained him plenty of praise both on and off the field, with British media quick to rally around the rising star who already has four goals to his name in just six Premier League matches.

The Times of London last week published a long piece detailing how Hwang, alongside Brentford forward Christian Norgaard, is one of the biggest "unsung heroes" of the Premier League.

"Hwang Hee-chan’s arrival at Wolves on a season-long loan from RB Leipzig in late August may have flown a little under the radar, but it has not taken long for the South Korea forward’s impact to be felt at Molineux," The Times said.

The Times goes on to note Hwang's ability to play multiple positions, his budding partnership with teammate Raul Jimenez and his apparent stamina — at least two of his four goals followed runs through the defense to clear a shot on goal.

The Times isn't the only publication to heap praise on Hwang. Journalist Luke Hatfield, a pundit for the Express & Star, also discussed Hwang's success in an interview on Tuesday.

"That’s his job, that’s what he’s come there to do. And he’s done just that. He’s got that clinical touch in the box."

Internally, praise for Hwang has been a bit more muted. While Wolves fans have quickly adopted the prolific Korean scorer as one of their own, manager Bruno Lage's praise is always caveated by the fact that Hwang is performing exactly as he expected him to.

“[Hwang is] doing well," Lage said after Hwang scored against Leeds on Saturday. "We knew when we brought him, we knew the quality of the player because we followed him for three or four years and we are happy."