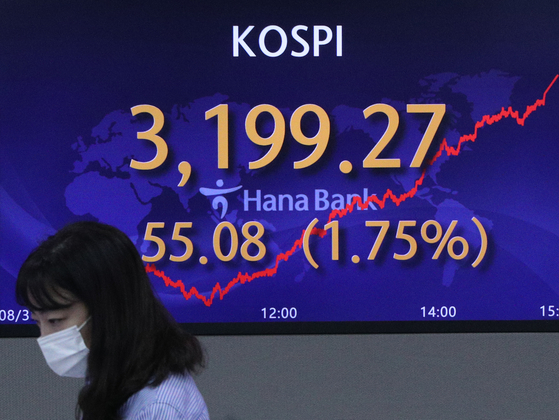 
Korean stocks rose for the third straight session Tuesday as foreign investors scooped up tech shares after an overnight tech rally on Wall Street. The Korean won rose against the dollar.

The stock market opened lower as investors took to the sidelines to assess the country's protracted fight against the current wave of Covid-19 and new Chinese regulations that tighten the time teens in China can spend on online video games.

The Kospi moved into positive terrain later in the session on a foreign investor buying spree.

Overnight, the tech-heavy U.S. Nasdaq composite rose 0.9 percent to a record high as investor sentiment was backed by the U.S. Federal Reserve Chair Jerome Powell's comments Friday (U.S. time) that signaled the Fed is in no rush to raise interest rates.

The local currency closed at 1,159.5 won against the U.S. dollar, down 7.5 won from the previous session's close.